The Battle Is On! 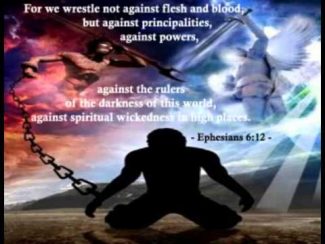 Yesterday we said that Jesus gave us a key difference between Himself and the devil: “The thief comes only to steal and kill and destroy; I came that they may have life, and have it abundantly.” (John 10:10) Satan will use others to deceive you, but we must remember who our battle is really with: the devil. “For our struggle is not against flesh and blood, but against the rulers, against the powers, against the world forces of this darkness, against the spiritual forces of wickedness in the heavenly places.” (Eph. 6:12)

We don’t struggle with people, but we are deceived into thinking that is where our battles are–in the flesh. When Paul was in Ephesus there was a riot (Acts 19:21-41). Demetrius and his associates instigated the riot against Paul. But it was actually the spiritual powers that opposed the gospel that were using Demetrius and the others to come against Paul. Tony Evans says in Victory in Spiritual Warfare,

“When Adam and Eve were in the garden, Satan came to them in the form of a snake (Gen. 3). The reason Satan took on the form of a snake is because he and his demons operate best when there is a physical presence through which to work. Remember this principle: While spiritual warfare is being waged in heavenly places, our enemy is very skilled at locating available vehicles in the physical realm through which to influence, manipulate, and deceive. Satan even comes to you in a form that you would not suspect. Paul tells us in 2 Corinthians 11:14, “Satan disguises himself as an angel of light.” This adds another dimension to the problems we face and fight in the spiritual realm because our problems do not exist only in the invisible spiritual realm; they also exist in the often unsuspecting vehicle Satan uses to get to you in the physical realm, which includes you—your mind, will, emotions, and body.

No matter what you or I come up with, Satan is going to try to come up with something better. The only way to live in the victory that has been secured for us in spiritual warfare is to study Satan’s game film, learn his strategies and weaknesses, and stand firm in God’s strength and according to God’s prescribed plays in the heavenly realm. We cannot outwit or outsmart the father of lies and master of deception. To try to do so on our own would be foolish. But we have a Champion who has already studied every move on the game board. He knows what we need to do to finish this game well. It’s time to put God’s strategies for victory in spiritual warfare into practice and make the devil and his demons the ones who sweat and cry instead.”

So how do we enter into this spiritual battle and operate from the victory Christ purchased for us? We need to understand what God has provided for us through His armor and His Word. We must also understand that our enemy is a formidable one, and the only way we can resist him is from our position and our covering in Christ. And we need to understand that even when it feels like all is going well, we are already in the battle. If you are a believer, Satan has already engaged you in spiritual battle, even if you don’t recognize it. Kay Arthur said: “And finally, although we are seated above the enemy, we are in an ever present warfare. Some skirmishes are worse than others; the war’s not over. So we need to stand firm in the Lord, put on the whole armor of God so we can resist the devil.”

There’s no question that we must be ready for Satan to attack at any time and from any angle. We won’t get a warning, so we must put on our armor daily. “Satan will not wait for the Christian to get his act together and dress for battle; he will start his attack when you are most vulnerable”–Women’s Evangelical Commentary. Tomorrow we will look at the armor the Lord provides for our use in His strength and might. “For though we live in the world, we do not wage war as the world does. The weapons we fight with are not the weapons of the world. On the contrary, they have divine power to demolish strongholds. We demolish arguments and every pretension that sets itself up against the knowledge of God, and we take captive every thought to make it obedient to Christ.” (2 Cor. 10:3-5)