Be Careful Of The Company You Keep 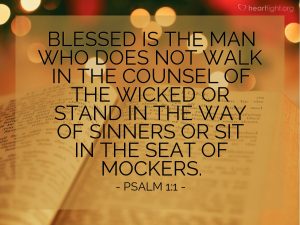 On Monday we looked at the first three verses of the first Psalm, but we mostly concentrated on verses 2 and 3: “Blessed is the man who walks not in the counsel of the ungodly, Nor stands in the path of sinners, Nor sits in the seat of the scornful; (2) But his delight is in the law of the Lord, and in His law he meditates day and night. (3) He shall be like a tree planted by the rivers of water, that brings forth its fruit in its season, whose leaf also shall not wither; and whatever he does shall prosper.” (Ps 1:1-3)

Today I was listening to a podcast on deception and temptation, which caused me to think back over the first verse in that passage: “Blessed is the man who walks not in the counsel of the ungodly, Nor stands in the path of sinners, Nor sits in the seat of the scornful” (Ps 1:1). I’m certain every age since Adam and Eve have faced temptation “in the counsel of the ungodly”, and every parent cautions their children against spending too much time with certain people. In the climate today to give in and be supportive of ungodliness and those who mock the Lord, it’s particularly important to choose our friends wisely.

Blessings come to anyone who refuses to be influenced by the ungodly, those whose lives are governed by evil passions. The blessed person refuses to align with sinners: those who choose to do wrong. Further, they refuse to join the ranks of those who mock God, mock the righteous, or oppose whatever is virtuous. “Do not enter the path of the wicked, and do not walk in the way of evil. Avoid it, do not travel on it; Turn away from it and pass on.” (Prov 4:14-15)

Psalm 1:1 describes a downward spiral. First is willingness to be influenced by the ungodly, followed by entering into fellowship with them, followed by joining in their scornful attitudes and behavior. Christians today need to lead a righteous life, refusing to be influenced by godless attitudes. Despite the temptations of popularity or comfort, believers should not side with those who disdain God’s standards of righteousness. “He who walks with wise men will be wise, But the companion of fools will be destroyed.” (Prov 13:20)

Temptation comes upon us because of our fallen sin nature. “But each one is tempted when he is drawn away by his own desires and enticed. Then, when desire has conceived, it gives birth to sin; and sin, when it is full-grown, brings forth death. Do not be deceived, my beloved brethren.” (James 1:14-16)

We can’t put any blame on someone else even if they are ungodly, scornful and mockers. But we can, and should, make the choice to spend time with those who are also seeking the Lord. “Let no one deceive you with empty words, for because of these things the wrath of God comes upon the sons of disobedience. Therefore do not be partakers with them. For you were once darkness, but now you are light in the Lord. Walk as children of light” (Eph 5:6-8).

Choose your companions wisely and be blessed! “Blessed are the undefiled in the way, who walk in the law of the Lord! Blessed are those who keep His testimonies, who seek Him with the whole heart!” (Ps 119:1-2)