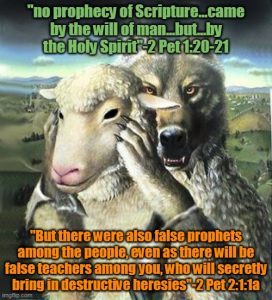 Peter reminds us to demonstrate the reality of our calling and election, which we are able to do because Jesus’s “divine power has given to us all things that pertain to life and godliness, through the knowledge of Him who called us by glory and virtue” (2 Pet 1:3). He also warned us that failing to add Christlike qualities of virtue, knowledge, self-control, perseverance, godliness, brotherly kindness and love to our faith (2 Pet 1:5-7), makes us ineffective and unproductive in our knowledge of Jesus for His kingdom. This failure results in us becoming as good as spiritually blind, forgetting we have been forgiven from our sin.

Last week we ended our discussion on the first chapter of 2 Peter stating, the prophets spoke God’s Words as they were “moved” by the Holy Spirit (2 Pet 1:20-21). And now as we begin the second chapter we see the danger of being spiritually blind: “But there were also false prophets among the people, even as there will be false teachers among you, who will secretly bring in destructive heresies, even denying the Lord who bought them, and bring on themselves swift destruction. And many will follow their destructive ways, because of whom the way of truth will be blasphemed. By covetousness they will exploit you with deceptive words; for a long time their judgment has not been idle, and their destruction does not slumber.” (2 Pet 2:1-3)

False prophets always plagued Israel, even in the days of the genuine prophets of God. Men attempted to make a name for themselves by misleading God’s people by claiming God had given them a message when He did not. Their false prophecies often would directly contradict the messages God gave His true prophets. Peter reveals that false teachers were rising up to mislead believers; and we still have plenty today. Jesus said, “Beware of the false prophets, who come to you in sheep’s clothing, but inwardly are ravenous wolves. You will know them by their fruits.” (Matt 7:15-16a)

Peter tells us these false teachers will teach that which contradicts or twists the truth, just as the serpent deceived Eve (Gen 3). Peter warns the attacks on God’s truth won’t be obvious; but they will introduce their deception secretly. Their goal, ultimately, is to convince Christians to join them in denying Jesus, the Master and Sovereign Lord, which will lead believers away from God’s Word.

How do we see this done today? We’ve all purchased Bible studies that contain Scripture within the study guide or book so that we don’t have to also get out our Bibles. BEWARE! Parts of Scripture are used and taken out of context to deceive us of God’s truth, and leads us away from God’s Word. “My people are destroyed for lack of knowledge” (Hos 4:6a), so we are to be like the Bereans, “for they received the word with great eagerness, examining the Scriptures daily to see whether these things were so” (Acts 17:11). Read God’s Word — not someone opinion of God’s Word!

One trait of these false teachers will be participation in immoral sexual conduct. “Many will follow their indecent behavior, and because of them the way of the truth will be maligned” (2 Pet 2:2 NASB). We see a similar warning from Jude: “For certain people have crept in unnoticed, those who were long beforehand marked out for this condemnation, ungodly persons who turn the grace of our God into indecent behavior and deny our only Master and Lord, Jesus Christ. (Jude 4) The false teacher/abuser claims he is tending souls, but his true interest is ravishing bodies. We must stay away from any teaching from those who participate in sexual immorality, or suggest it is permissible for Christians to do so. If you aren’t sure what we mean, study Romans 1.

And then we come to the charlatan: “By covetousness (in their greed) they will exploit you with deceptive words; for a long time their judgment has not been idle, and their destruction does not slumber” (2 Pet 2:3). These charlatans can just as easily be known as con men and women. The Charlatan is only interested in the Christian faith to the extent that it can fill his wallet. He uses his leadership position to benefit from others’ wealth. Since Simon Magus tried to purchase the power of the Holy Spirit (Acts 8:9-24), the Charlatan has appeared in many forms, always seeking prominence in the church so that he can live in extravagance.

How can Christians protect ourselves against these sneaky attacks on the truth from those who claim to be one of us? We must work to know and understand God’s Word and pay attention to what we’re hearing and seeing from those with influence among us. “Beloved, do not believe every spirit, but test the spirits, whether they are of God; because many false prophets have gone out into the world.” (1 Jn 4:1) And the way we can know the truth from lies is to KNOW God’s Word (Acts 17:11).

The consequences for these false teachers will be harsh. Peter uses ominous language: Their condemnation has been hanging over them; their destruction has not been sleeping. In other words, God has not forgotten; His judgment will come at exactly the right time. Later in the chapter, Peter will use the phrase “accursed children”, which in Hebrew thinking always referred to those under God’s ultimate condemnation. In short, such persons are not saved believers and will suffer the eternal consequences of their sins. DO NOT FOLLOW THEM!!!!

One thought on “Beware of Wolves”