Turn Away From Defiance 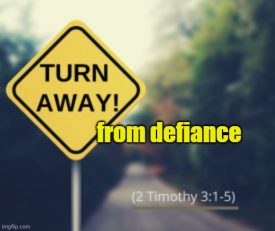 We continue to look at the passage that’s similar to end of Rom 1 we studied in The Reality of God’s Wrath. First we discussed our need to Turn Away From Self Idolatry. Next we discussed our need to Turn Away From Disobedience. We continue with the same passage today, as we look at turning away from defiance to God’s Word. “But realize this, that in the last days difficult times will come. For men will be lovers of self, lovers of money, boastful, arrogant, revilers, disobedient to parents, ungrateful, unholy, unloving, irreconcilable, malicious gossips, without self-control, brutal, haters of good, treacherous, reckless, conceited, lovers of pleasure rather than lovers of God, holding to a form of godliness, although they have denied its power; Avoid such men as these.” (2 Tim 3:1-5)

We’re moving to the part of the list that relates to interpersonal relationships. The list in this passage is similar to the “deeds of the flesh”, where Paul says “those who practice such things will not inherit the kingdom of God” (Gal 5:19-21). So the list of interpersonal relationship terms I call “defiance” in the choice of how to treat each other in light of God’s Word: “Let no unwholesome word proceed from your mouth, but only such a word as is good for edification according to the need of the moment, so that it will give grace to those who hear. Do not grieve the Holy Spirit of God, by whom you were sealed for the day of redemption. Let all bitterness and wrath and anger and clamor and slander be put away from you, along with all malice. Be kind to one another, tender-hearted, forgiving each other, just as God in Christ also has forgiven you.” (Eph 4:29-32)

With God’s viewpoint in mind on how to treat one another, specifically “be kind to one another, tender-hearted, forgiving each other, just as God in Christ also has forgiven you”, let’s look at today’s list from the passage we continue to study. The first in this list are “malicious gossips” or “slanderers”. The Hebrew word translated “gossip” in the Old Testament is defined as “one who reveals secrets, one who goes about as a talebearer or scandal-monger”. A gossiper is a person who has privileged information about someone and proceeds to reveal that information to those who have no business knowing it.

Gossipers often have the goal of building themselves up by making others look bad, which is prideful, even if they preface the story with “we really need to pray for so and so because…”. How many of us have those kinds of “friends” in our lives? I know I have more than a couple; but my response as a Christ follower is NOT to be like carnal friends because “A perverse man spreads strife, and a slanderer separates intimate friends.” (Prov 16:28) Instead, I am to “let all bitterness and wrath and anger and clamor and slander be put away from you, along with all malice”.

Then we see those “without self-control”, people who are ungovernable, who seek first to satisfy their lusts and passions immediately and without a thought or care for anyone else. “Self-control” or “temperance” is the ability to control oneself, and involves moderation, constraint, and the ability to say “no” to our baser desires and fleshly lusts. One of the proofs of God’s working in our lives is the ability to control our own thoughts, words, and actions. It’s not that we are naturally weak-willed. But our fallen nature is under the influence of sin (Rom 6:6).

Alternatively, “self control” is a fruit of the Spirit (Gal 5:22-23), and our character only changes because of the Holy Spirit’s work in us. God’s Words says that “for it is God who is at work in you, both to will and to work for His good pleasure” (Phil 2:13). Every good thing we do is the fruit of the Spirit’s work in our lives. Believers need self-control because the outside world and internal forces still attack us (Rom 7:21-25). Like a vulnerable city, we must have defenses. We don’t exhibit “self-control” if we continually dally with that which would enslave us, which is why God tells us to set ourselves apart and be holy (1 Pet 1:16).

Those who are “malicious gossips and slanderers” and are “without self control” are evil people; “brutal” from the Greek word anēmeroi. This most literally means “savage or untamed”. Paul’s use of it here might refer to physical violence, but it certainly implies a wild and un-controlled attitude. A synonym of this word is the next that follows: “haters of good”. Being “haters of good” was Lord’s charge to the Pharisees. Jesus told His listeners to respect the scribes and Pharisees due to their position of authority but not to emulate them, “for they do not practice what they preach” (Matt 23:3-5). Never forget these self-righteous “haters of good” called to have our Savior put to death.

Those who are “haters of good” are “treacherous” or “traitors”, which is next in the list. It describes those who actively work against the interests of their so-called friends and allies. Judas Iscariot was certainly a traitor, but he isn’t the last. “Now the Spirit expressly says that in later times some will depart from the faith by devoting themselves to deceitful spirits and teachings of demons” (1 Tim 4:1).

Next evil people will be “reckless” which includes the idea of not thinking before acting, or acting in a thoughtless manner, and without a fear of consequences. This is the “ready-fire-aim” mentality, completely the opposite of “everyone must be quick to hear, slow to speak and slow to anger” (James 1:19).  The “ready-fire-aim” mentality is incompatible with higher ideals such as “self-control”. A “reckless” person certainly does not “fear of the Lord [which] is the beginning of knowledge; Fools despise wisdom and instruction.” (Prov 1:7)

The last in this list of “defiance” is “conceited”, which is excessive pride in oneself. Conceited people love to talk about themselves and their achievements, showing lesser regard for the accomplishments of others. The original Greek description used by Paul is tetyphōmenoi, which literally means to surround with smoke or mist. As a metaphor, this was used to describe someone who was blinded by their own sense of self-worth. Conceited people often take the credit for every good thing God has done in their lives, and consider themselves intrinsically superior to most other people.

C.S. Lewis describes humility (the opposite of prideful and conceited) not as thinking less of ourselves, but as thinking of ourselves less. The Bible has harsh words for the conceited because pride gets in the way of all God wants to do in and through us, and takes us right back to “love of self”. Pride gets in the way of our relationship with God. He resists the prideful but gives grace to the humble (James 4:6).

This list of defiance to God’s instructions include evil people (those who haven’t submitted themselves to the Holy Spirit’s work) who are “malicious gossips”, “without self-control”, “brutal”, “haters of good”, “treacherous” or “traitors”, “reckless” and “conceited”. This portion of the list defies who the Lord expects us to be in this world as His ambassadors, and we won’t find this list among the fruit of the Spirit (Gal 5:22-23). Whatever we see of our selves within this list, we must take to the throne room of God, repent, and ask Him to change our hearts so that we can be used for His glory.