Not Free To Satisfy Our Sinful Sexual Nature 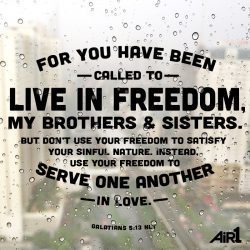 Paul has urged his readers not to waste their freedom in Christ to merely serve themselves. “For you, brethren, have been called to liberty; only do not use liberty as an opportunity for the flesh, but through love serve one another.” (Gal 5:13) We aren’t to do whatever comes naturally. Paul has made clear that God calls us to use our freedom to serve each other in love under the power of His Holy Spirit with us.

According to Paul, we are absolutely able to allow God’s Spirit to lead our thoughts, words, and actions instead of following our own sinful desires. “I say then: Walk in the Spirit, and you shall not fulfill the lust of the flesh. For the flesh lusts against the Spirit, and the Spirit against the flesh; and these are contrary to one another, so that you do not do the things that you wish. But if you are led by the Spirit, you are not under the law.” (Gal 5:16–18)

Paul begins to identify some of the sins we are inclined to take part in when we refuse to walk by the power of God’s Spirit. Paul isn’t creating new law to be followed; he is giving examples of sinful behaviors, which don’t correspond to living free in Christ, through the power of God’s Spirit. “Now the deeds of the flesh are evident, which are: immorality, impurity, sensuality, idolatry, sorcery, enmities, strife, jealousy, outbursts of anger, disputes, dissensions, factions, envying, drunkenness, carousing, and things like these, of which I forewarn you, just as I have forewarned you, that those who practice such things will not inherit the kingdom of God.” (Gal 5:19-21)

Paul is saying if the flesh is defined as our humanity, as life without the power of the Spirit of God, then let’s look what happens to us if God isn’t in the picture. Do we become more righteous or do we drift away from God into sin? Paul is saying the answer to that question is pretty obvious: just look around.

The first three deeds of the flesh listed are sexual: immorality, impurity, sensuality. These aren’t unique to our time in history; there’s ample evidence to show that the sexual life of the Greco-Roman world at the time of the New Testament was sheer chaos. But we are to remember that as Christ followers, our bodies are His temple. “Flee sexual immorality. Every sin that a man does is outside the body, but he who commits sexual immorality sins against his own body. Or do you not know that your body is the temple of the Holy Spirit who is in you, whom you have from God, and you are not your own?” (1 Cor 6:18-19)

Still worse was the unnatural vice which was rampant, beginning in the imperial household. Caligula notoriously lived in habitual incest with his sister Drusilla, and the lust of Nero did not even spare his mother Agrippina. The sin of homosexuality was even more prevalent in Paul’s day than it is today. A study of the fall of the Roman Empire suggests that any society that tolerates the unchecked promotion of such perversions will inevitably fall apart from the rottenness within because it is an abomination to the Lord.

Foremost among the acts of the flesh is immorality, this is from the Greek word porneia, which is often translated as fornication, the term is rooted in a word meaning: “to sell” and referred originally to prostitution. In Jesus’ day sexual activity with a person one is not married to would meet the definition of porneia, and is a broad term used to cover any form of sexual sin.

The second word is “impurity” comes from the Greek word akatharsia from which the word catharsis or “cleansing” comes. The alpha privitive (a) makes it a negative, meaning: “filthiness,” or “uncleanness.” It is a more general term than immorality, going beyond the act to the evil thoughts and intentions of the mind. It could refer to what we would call perverted forms of sex – homosexuality, child abuse, and various strange and kinky sexual practices, inclusive of pedophilia. They would all be covered by this one word “impurity”. This word was used in other ancient writings to refer to pus that oozed from an unclean wound. This is what the flesh produces.

Sensuality – the Greek word aselgeia originally referred to any excess or lack of restraint, but came to be primarily associated with sexual excess. It is not a stretch of the imagination to understand the kind of unbridled unrestraint that is associated with the word. All we have to do is take a look at our society today with its fixation on sex at every turn, and you can easily understand the meaning and implications of the word. The same Greek word appears in this Scripture: “and they, having become callous, have given themselves over to sensuality for the practice of every kind of impurity with greediness” (Eph 4:19). It speaks of someone who flaunts their immorality, throwing off all restraint and having no sense of shame, propriety, or embarrassment.

An excess or lack of restraint has at its root bitter envy and and selfishness. “But if you have bitter envy and self-seeking in your hearts, do not boast and lie against the truth. This wisdom does not descend from above, but is earthly, sensual, demonic.” (James 3:14-15) Most of the New Testament writers warn against this worldly approach to life. Thinking in such a short-sighted way contrasts with the life God calls His people to follow. The world’s definitions of wisdom and success is not true, godly wisdom.

This counterfeit wisdom promises to give us all the desires of our hearts. Instead, it fills our hearts with envy. We’re never really satisfied, because we learn to constantly covet what others have that we don’t. And it fills our hearts with selfish ambition to do whatever is required to get what we want. “For where envy and self-seeking exist, confusion and every evil thing are there.” (James 3:16) Our selfish ambition will eventually require us to hurt someone else to get what we want because it encourages us to make excuses for our selfishness; and makes us hard-hearted and resistant to correction.

Is it any wonder that God chooses to turn us over to our sinful nature if we refuse to repent? “And just as they did not see fit to acknowledge God any longer, God gave them over to a depraved mind, to do those things which are not proper, being filled with all unrighteousness, wickedness, greed, evil; full of envy, murder, strife, deceit, malice; they are gossips, slanderers, haters of God, insolent, arrogant, boastful, inventors of evil, disobedient to parents, without understanding, untrustworthy, unloving, unmerciful; and although they know the ordinance of God, that those who practice such things are worthy of death, they not only do the same, but also give hearty approval to those who practice them.” (Rom 1:28-32)