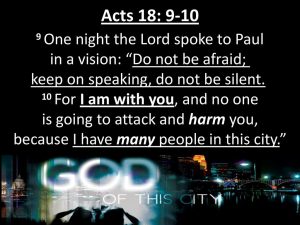 You don’t have to look very far to find people who are living in fear; some days you may only need to look in the mirror. During the time period in today’s Scripture, the city was responding to the gospel and the strongholds of evil were being broken down. The life of the city was being disrupted by the awakening which was spreading because of Paul’s teaching, and the merchants and government didn’t like it. They aimed to make the Christians fearful so they would stop sharing the gospel. Today, like then, there are many people doing the devil’s work attempting to silence Christ followers and those still speaking God’s whole truth from the pulpit.

“Now the Lord spoke to Paul in the night by a vision, ‘Do not be afraid, but speak, and do not keep silent; for I am with you, and no one will attack you to hurt you; for I have many people in this city.'” (Acts 18:9-10) What the Lord said could be translated Stop being afraid, but keep right on speaking–I’ve got your back. This reveals that Paul was indeed becoming afraid. We sometimes think of Paul as being so bold, so fearless — yet he suffered just as we do from apprehensions, forebodings, and fears.

“I find many churches today that measure their success by what is going on in the congregation, but that is not the mark of success. The church is successful only when things start happening in the world.” — Ray Stedman

The Lord wants all to be saved from an eternity in the lake of fire. “For God so loved the world that He gave His only begotten Son, that whoever believes in Him should not perish but have everlasting life.” (John 3:16) When the community reacts by faith to the gospel, the church is successful; and it is truly the only metrics that matter to God.

All the evils we have in our modern day were present in Corinth. As the revolutionary message of the gospel was striking right at the very core of the life of the city, breaking down the patterns of evil that had locked men and women into bondage, Paul was joyous at the change in lives but he knew that he was in for trouble. “For we do not wrestle against flesh and blood, but against principalities, against powers, against the rulers of the darkness of this age, against spiritual hosts of wickedness in the heavenly places.” (Eph 6:12)

But this is why the Lord appeared to him. How gracious and reassuring are his words: Do not be afraid, but speak, and do not keep silent; for I am with you, and no one will attack you to hurt you; for I have many people in this city.

The Lord has our backs as well. We are still here on this earth to share His gospel, to speak His truth seasoned with salt and grace, and to allow His light to shine through us for the Lord’s glory. The Lord Jesus said, “You are the salt of the earth…you are the light of the world…” (Matt 5:13a, 14a)

Some of the Lord’s most encouraging words are “I have many people in this city”. They had not yet become Christians — but the Lord knew they were there. There is nothing more encouraging than going into a strange situation with the realization that God has brought us there because there are people who He already knows about who will respond to what we have to say. So it was with the apostle. He was greatly strengthened, and for a year and a half he was able to preach the truth until there was a great stirring in this city.

Just like He has used others, the Lord only asks for our willingness to humble ourselves to His will, to walk in the steps He planned for us before we were born, and to allow Him to use us to accomplish His will for His kingdom’s sake. Paul’s experience tells us that fear is ‘common to man.’ Paul was God’s man faithfully fulfilling God’s calling when God promised His protective care. Are we boldly following God’s calling to reach out to unbelievers with God’s message of hope and redemption, confident in His promises to be with us always?

Father, thank you for this account which encourages me, for I know that you are at work today just as you were then. Lord, help me to stay committed to the task given to me by You when You gave me spiritual gifts and the power of Christ’s resurrection.

Source: Encouragement From the Lord by Ray Stedman