Beware If You Are A False Witness 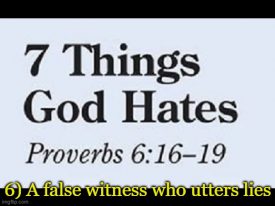 We’re continuing to look at the seven things in our passage that God sees as an abomination. God is a tender, compassionate God who is rich in mercy and grace, but He is also a God of justice—One who hates and abhors sin in every form. Preachers often fail to remind people that while our God is essentially a God of love, He also has the capacity to hate and wield His vengeance (Rom 12:19).

In Proverbs 6:16-19 the passage clearly declares that God hates haughty eyes (a proud look), a lying tongue, hands that shed innocent blood, a heart that devises wicked plans, feet that are swift in running to evil, a false witness who speaks lies, and one who sows discord among brethren. Today, we’re looking at the sixth thing written here that is an abomination to our Lord, “a false witness who utters lies”.

The lying tongue is an offense so serious that it is mentioned twice in this short series of abominable sins. In addition to gossiping, back-biting, and tale-bearing—it may in this case also refer to perjury when giving a testimony before a court of law. We are living in perilous times. A recent poll on truthfulness among Americans claims that “two out of every three Americans see nothing wrong with telling a lie.” One children’s magazine says that some lying (on the part of children) is considered normal, and in fact, the writer says that “a child’s first few lies are an important step in the development of self-confidence.”

Many who have professed faith in Christ are careful to avoid adultery and drunkenness and outright stealing—but at the same time there are some who seem to delight in assailing the character of others. They criticize and find fault and bear tales—often without knowing the reasons for the actions of those whom they criticize. Unnecessary information (gossip) is passed along to others. It would not be so bad if it would “go in one ear and out the other,” but it usually goes in one ear, gets all mixed up, and then slips out of the mouth of the person to whom it was told—and the final story has a lot of falsehood mixed with it.

God repeatedly warns against going up and down as a talebearer among the people (Lev 19:16; Prov 17:9). We are told that “in repentance and rest you will be saved, in quietness and trust is your strength” (Is 30:15). All of us need to pledge today to do less talking and more praying; to give less criticism and more affirmation; to be more strict with ourselves and more gracious toward others. As His witnesses here on earth, every day He is shaping us more and more into His image. Jesus is “the way, and the truth, and the life” (John 15:6), so when we are dishonest, we are moving away from Christ.

One thought on “Beware If You Are A False Witness”