A Picture of Peace And Unity 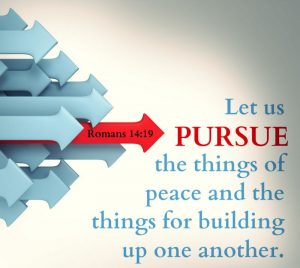 We’ve been studying how Christians are to live together and in the world in light of offering our entire lives in sacrifice to God (Rom 12:1–2) as is our true and proper worship. We’ve found that if we love others the way Christ loves us, we will forgive them and give others the same undeserved grace we have received. Paul ended this chapter with: “Do not be conquered by evil, but conquer evil with good.” (Rom 12:21) In essence, he commands us to be strong in our conviction to live in this way. We are not to be overcome by evil, but to overcome evil with good.

In the next chapter, we are admonished to submit to earthly authority because all authority comes from God. We are to understand that love is our primary duty, and in order to love well we must understand that we owe honor to others more than ourselves, and we need to understand that time is short. Now we come to chapter 14, which tackles an issue as relevant for the modern church as it was for Roman believers in Paul’s era.

Many decisions in the Christian life don’t come with absolute, yes-or-no, one-size-fits-all answers. On major issues, God’s Word is clear. But on less important subjects, Christians might find it necessary to agree to disagree. How to live out that kind of unity is the focus of Paul’s comments here. “Accept anyone who is weak in faith, but don’t argue about disputed matters.” (Rom 14:1)

Paul divides the church into two groups. There are those who are fully convinced that because of God’s grace, they are now free in Christ to eat and drink anything. Nothing is unclean for them. Then there are believers comparatively “weak” in their faith, who do not feel a clear conscience acting outside of those restrictions. They may think it’s still wrong for any Christians to eat non-kosher meat, for instance (Rom 14:1–2).

Though Paul calls these concerned believers “weak in faith,” he instructs those who are comparatively strong and free in their faith to welcome them. These less-assured Christians ought to be fully and completely accepted into the church, and not only so they can be argued out of their convictions. The picture Paul paints is of these two groups co-existing in the church in unity and peace.

Neither group should pass judgment on the other. God has welcomed both groups into His family. How dare either group turn the other away? The Lord is the master of all of them, after all. None of them are master to the others, no matter whose faith is stronger or weaker. Each person should be fully convinced of his or her position on these issues and practice them to honor the Lord while giving thanks to God. Whatever we do, we should honor the Lord, because all of us in Christ belong to Him (Rom 14:3–9).

We have no place to judge each other. A judgment day is coming for Christians when Christ will examine all our works. He will determine which of our deeds were worthwhile and which were worthless. Though our salvation in Christ is secure, each of us will give an account of ourselves to God for how we spent our days. We will not be judged according to the preferences of other believers (Rom 14:10–12).

Having the “freedom” to do something doesn’t make that action acceptable in all times and places. It’s better to not do anything that causes another Christian to stumble, rather than pass judgment on oneself by encouraging someone to violate their own conscience. We should set aside our freedom to promote peace, unity, and building up the church instead of tearing it down, so that we avoid tripping up someone who is weaker in their faith (Rom 14:13–24). “So then, let us pursue what promotes peace and what builds up one another.” (Rom 14:19)

This Scripture lives out: Love one another deeply as brothers and sisters. Outdo one another in showing honor. (Rom 12:10) We don’t talk down to others’ choices in the gray area, thereby making divisions. Instead we honor one another and choose to build them up instead of tearing them down (Eph 4:29) for the unity of Christ’s church body. It’s how we make the choice to live out a previous command: “If possible, as far as it depends on you, live at peace with everyone.” (Rom 12:18) When we do this, we turn from evil (repent) and seek peace that only comes from the Lord: “Turn away from evil and do what is good; seek peace and pursue it.” (Ps 34:14)

Instead, we keep disagreements about non-essential convictions and practices between ourselves and God. He will deal with us on any issue as long as we abide in Him and His Word. “Whatever you believe about these things, keep between yourself and God. Blessed is the one who does not condemn himself by what he approves.” (Rom 14:22)

One thought on “A Picture of Peace And Unity”