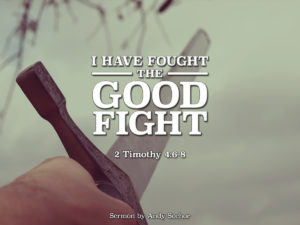 This morning I woke up a bit early and listened to a sermon by Tony Evans that he gave after his wife died. One of the Scriptures he taught on was, “I have fought the good fight, I have finished the course, I have kept the faith” (2 Tim 4:7).

“I have fought the good fight” is significant for believers today because it serves as a stark reminder that the Christian life is a struggle against evil—within ourselves and in the world (Rom 8:7; James 4:4). Earlier in this same epistle, Paul reminded Timothy to “endure hardship as a good soldier of Jesus Christ.” (2 Tim 2:3). The Greek word agonizomai, means literally “to engage in conflict”, and was used in the context of competing in athletic games or engaging in military conflict. Considering that Paul was chained to a Roman soldier when he wrote this epistle, it would have been easy for him to make such an analogy.

This morning Dr. Evans made a comment after reading this verse that said not all fights are worth fighting, but some are. Although we as Christians are called “If possible, so far as it depends on you, [to] be at peace with all men” (Rom 12:8), there are some things worth fighting for! Jude let us know that we should “contend earnestly for the faith which was once for all handed down to the saints” (v 3).

Our battle is not with flesh and blood “but against the rulers, against the powers, against the world forces of this darkness, against the spiritual forces of wickedness in the heavenly places” (Eph 6:12). The Christian life is a fight in that Christians face a never-ending struggle against evil—not an earthly military campaign, but a spiritual battle against Satan. This is why we must “take up the whole armor of God, that you may be able to withstand in the evil day” (Eph 6:13-18).

As believers today, we can have no greater sense of fulfillment than to know, as Paul did, that we have fully accomplished all that the Lord has called us to do (Matt 25:21). If you don’t think you know what the Lord is calling you to do, ask God (James 1:5). The only way to accomplish what He wants us to accomplish is to abide in Him, and He in us because apart from Him, we can do nothing (John 15:5). May we “fight the good fight” and “be watchful in all things, endure afflictions, do the work of an evangelist, fulfill your ministry” (2 Tim 4:5).