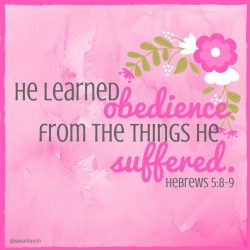 This morning’s Scripture was an eye-opener during my coffee with Jesus. “In the days of His flesh, He offered up both prayers and supplications with loud crying and tears to the One able to save Him from death, and He was heard because of His piety. Although He was a Son, He learned obedience from the things which He suffered. And having been made perfect, He became to all those who obey Him the source of eternal salvation, being designated by God as a high priest according to the order of Melchizedek.” (Heb 5:7-10)

In verse 8 we see that here was the Lord Himself in the flesh learning obedience to His own Word by His suffering. How can we expect to not experience suffering if our Lord had to also experience it? I thought again to last week’s post, Our Protection is Under Authority, where we discussed the following: We cannot exercise legitimate authority over what we are supposed to be over unless we learn to be under what God has put over us. If we are out of alignment with what is legitimately supposed to be over us (we rebel against His Word), then we lose heaven’s authority to be able overcome situations here on earth. To me, this speaks to the importance of our obedience to the Lord’s decrees. It doesn’t matter if it meets with our own thought process because we are often deceived by Satan.

Verse 9 particularly jumped off the page because this is what gives us hope. Jesus “became to all those who obey Him the source of eternal salvation, being designated by God as a high priest according to the order of Melchizedek.” Until last week, I never understood the significance of Jesus as a high priest according to the order of Melchizedek, whose name means “king of righteousness”. He was a king of Salem (Jerusalem) and priest of the Most High God (Gen 14:18-20), and first met Abraham after Abraham’s defeat of Chedorlaomer and his three allies. Melchizedek presented bread and wine to Abraham and his weary men, demonstrating friendship. He refreshed those who were weary – sick and tired. Then he bestowed a blessing on Abraham in the name of El Elyon (“God Most High”) and praised God for giving Abraham a victory in battle.

Don’t miss this: Abraham was legitimately aligned under God, was obedient to what God called him to do, and was therefore protected by God’s covering, who refreshed him physically and spiritually. The following wisdom from Solomon seems to sum this up: “Do not be wise in your own eyes; Fear the Lord and turn away from evil. It will be healing to your body and refreshment to your bones.” (Prov 3:7-8)