Praying For Strength At Wit’s End 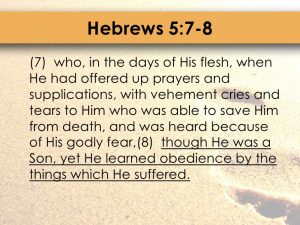 What an amazing Lord we serve that offers us His rest, while He is able to empathize with our weaknesses. How can Jesus sympathize, how does He understand our pressures, if He has never sinned? The answer to that leads us into the dark shadows of Gethsemane. There is no other incident in the gospels that fits the description of this passage where, with prayers and supplications, with loud cries and tears, He cried unto Him who was able to save Him from death: “who, in the days of His flesh, when He had offered up prayers and supplications, with vehement cries and tears to Him who was able to save Him from death, and was heard because of His godly fear, though He was a Son, yet He learned obedience by the things which He suffered.” (Heb 5:7-8)

We have all been in this place, where we don’t understand why we’re having to endure such pain and anxiety. I have friends who now are experiencing such pain. What’s amazing is our Lord did as well. He was fully aware of what would transpire, and yet we see His unexpected and unimagined agony. His anticipation of what He would be going through came to Him full-force in His explanations of it to the disciples (John 13-14).

In the midst of His distress of soul, He does an unusual thing. For the first time in His ministry He appealed to His own disciples for help. He asked them to bear Him up in prayer as He went further into the shadows, falling first to His knees and then to His face, crying out before the Father (Matt 26:36-46). We need to pray for those going through difficult times, so that their faith doesn’t fail. “For this reason we also, since the day we heard it, do not cease to pray for you, and to ask that you may be filled with the knowledge of His will in all wisdom and spiritual understanding” (Col 1:9)

There He prayed three separate times and each prayer is a questioning of the necessity of this experience. “O My Father, if it is possible, let this cup pass from Me; nevertheless, not as I will, but as You will.” (Matt 26:39)

He was beseeching the Father to make clear to Him whether this was a necessary activity, so unexpected and deep was His suffering, so suddenly had it come upon Him, bewildering Him, just as sudden experiences and catastrophes come bewilderingly to us. To deepen the mystery of this it is implied that the Lord Jesus faced the full misery which sin produces in the heart of the sinner while he is yet alive. He knew all the naked filth of human depravity would force itself upon Him and He felt the burning, searing shame of our misdeeds as though they were His. No wonder he cried to the Father. “O My Father, if this cup cannot pass away from Me unless I drink it, Your will be done.” (Matt 26:42)

This explains the strange words, “though He was a Son, yet He learned obedience by the things which He suffered”. He learned what it means to obey God when every cell in His human body wanted to forgo this duty. Yet, knowing this to be the will of God, He obeyed, trusting God to see Him through. He learned what it feels like to hang on when failure makes us want to throw the whole thing over, when we are so defeated, so utterly despairing that we want to forget the whole thing. He knows what this is like; He went the whole way, He took the full brunt of it.

Jesus Christ entered into the full force of two of our lives’ greatest mysteries: obedience and suffering. Where on the spectrum of obedience do we pray “nevertheless, not as I will, but as You will”? How did He prevail? He refused to question the Father’s wisdom. He refused to blame God. He took no refuge in unbelief even though this agony came unexpectedly upon Him.

Instead, Jesus cast Himself upon the Father’s loving, tender care and looked to Him to sustain Him. When He did, He was brought safely through, although He endured fierce agony. So we read, “Let us therefore come boldly to the throne of grace, that we may obtain mercy and find grace to help in time of need.” (Heb 4:16) No matter how deep, how serious that need may be, he can fully meet it, though we may be at wit’s end. “Therefore humble yourselves under the mighty hand of God, that He may exalt you in due time, casting all your care upon Him, for He cares for you.” (1 Pet 5:6-7)

Father, thank you that the Garden of Gethsemane was not a mere play acting upon a stage. The Lord Jesus did not come into the world to perform a role, He fully entered into life. He went the whole way, He bore the full brunt. Help me to trust in Him no matter what circumstances come upon me. Thank You for Your faithfulness. Help me to remember that my hope is in You, and You alone. In the precious name of Jesus, amen.