Made In God’s Image 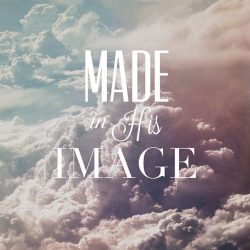 When we consider all that the Almighty has created, and all that He can do, I wonder as David did why He cares so much for us. “When I consider Your heavens, the work of Your fingers, The moon and the stars, which You have ordained, What is man that You are mindful of him, And the son of man that You visit him?” (Ps 8:3-4)

After God created the heavens and the earth by His Word (Gen 1:1-25), He then created human life. “Then God said, ‘Let Us make man in Our image, according to Our likeness; let them have dominion over the fish of the sea, over the birds of the air, and over the cattle, over all the earth and over every creeping thing that creeps on the earth.'” (Gen 1:26) God formed Adam from the dust and gave him life by sharing His own breath (Gen 2:7).

Humans are unique among all God’s creations, having both a material body and an immaterial spirit. Adam didn’t resemble God in the sense of God’s having flesh and blood. Scripture says that “God is spirit” (John 4:24). The image of God (Latin: imago dei) refers to the spiritual part of us. It sets human beings apart from the animal world, fits us for the dominion God intended us to have over the earth (Gen 1:28), and enables us to commune with our Maker. It is a likeness mentally, morally, and socially.

Socially, humanity was created for fellowship. This reflects God’s triune nature and His love. In Eden, humanity’s primary relationship was with God (Gen 3:8), and God made the first woman because “it is not good for the man to be alone” (Gen 2:18). As we are to “love one another” as Christ loved us (John 13:34), we are meant to fellowship with one another (1 John 1:7), bear one another’s burdens (Gal 6:2), and pray for each other (James 5:16).

Even though man was created with a righteous nature, we were given free will. Adam and Eve made an evil choice to rebel against their Creator. In so doing, they marred the image of God within themselves, and passed that damaged likeness on to all of their descendants (Rom 5:12). Today, we still bear the image of God (James 3:9), but we also bear the scars of sin. Mentally, morally, socially, and physically, we show the effects of sin.

The good news is that when by our faith in Jesus Christ as our Lord and Savior, we receive God’s redemption. He then begins to restore the original image of Himself in us, creating a “new self, created to be like God in true righteousness and holiness” (Eph 4:24). That redemption is only available by God’s gift of grace, and restores our relationship with Him (Eph 2:8-9). Through Christ, we are made new creations in the likeness of God (2 Cor 5:17). In redemption, God gives us “the new man who is renewed in knowledge according to the image of Him who created him” (Col 3:10).

After David marveled that God cares so much for us, he then marveled that He created us to rule the earth. “You have made them a little lower than the angels and crowned them with glory and honor. You made them rulers over the works of your hands; You put everything under their feet:” (Ps 8:5-6)

While Adam gave his God-given rule over to Satan, Jesus restored rule over all things. God showed His great power and sovereignty “when He raised [Christ] from the dead and seated Him at His right hand in the heavenly places, far above all principality and power and might and dominion, and every name that is named, not only in this age but also in that which is to come. And He put all things under His feet, and gave Him to be head over all things to the church, which is His body, the fullness of Him who fills all in all.” (Eph 1:20-23)

So “what is man” that God who “made them a little lower than the angels” is mindful of us? Our value is based on His love for us. “For God so loved the world that He gave His only begotten Son, that whoever believes in Him should not perish but have everlasting life.” (John 3:16) He created us to rule over things of this earth, and to commune with Him and each other. Even in our sinful marred image of Himself, He can bestow Christ’s righteousness on us, and share His authority to “tread on serpents and scorpions” (Satan and his fallen angels) for His glory (Luke 10:19). “For we are God’s masterpiece. He has created us anew in Christ Jesus, so we can do the good things he planned for us long ago.” (Eph 2:10)

It is Christ’s Spirit and power within us that is transforming our spirit back to God’s image. “But we all, with unveiled face, beholding as in a mirror the glory of the Lord, are being transformed into the same image from glory to glory, just as by the Spirit of the Lord.” (2 Cor 3:18)

It is in His power and victory, that He who created us in His image, but lower than the fallen angels, has disarmed Satan’s power over all who will believe in Christ by faith and call Him Lord and Savior from our hearts. “Having disarmed principalities and powers, He made a public spectacle of them, triumphing over them in it.” (Col 2:15)

It is in our surrender to Jesus Christ as our Lord, that we have His power within us to tread on serpents and scorpions. “Submit therefore to God. Resist the devil and he will flee from you.” (James 4:7) Let us praise His name forevermore! “O Lord, our Lord, How excellent is Your name in all the earth!” (Ps 8:9)