Pray At All Times in the Spirit 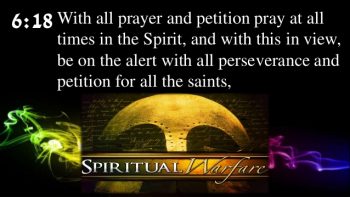 Paul ends his discourse on the armor of God which we are to wear, with how to apply the armor–prayer! “With all prayer and petition pray at all times in the Spirit, and with this in view, be on the alert with all perseverance and petition for all the saints” (Eph 6:18). Since the battle begins in the spiritual realm, if we want to be victorious we must call heaven down to earth.

Simply defined, prayer is earthly permission for heavenly interference. Since God chose to give mankind rulership over the earth (Gen 1:26-31), He gave us the option of leaving Him out (see Rom 1 for what happens when we leave God out). He also gave us the option of calling on Him to join in on the rulership He has willingly given us. God many times doesn’t choose to act until we ask for His divine intervention based on His Word, His truth, His promises and His character. He intervenes in response to our faith, our desire for Him and His will, our submission to Him, and our acknowledgment of our need for Him. And that’s done when we humble ourselves before the Almighty in prayer.

God cherishes our intimate, specific prayers to Him; they are like a fragrant incense to Him. In biblical times the coals from the altar of sacrificial offerings would rise to heaven as incense. In the Great Tribulation we see our prayers have been collected and saved. “And the smoke of the incense, with the prayers of the saints, went up before God out of the angel’s hand” (Rev 8:4). This incense is the worth of the Lord Jesus (Eph 5:2). He wants to hear from us and He listens as long as we approach Him humbly and seeking His will. “Therefore, confess your sins to one another, and pray for one another so that you may be healed. The effective prayer of a righteous man can accomplish much.” (James 5:16)

Prayer calls on God to intervene in ways that He has already declared that He wants to intervene; He’s just waiting for us to ask. Prayer should be predicated on what God has already declared He will do. In order to do this effectively, we need to study His Word (graphe), understand His message (logos), and become intimate with His utterance (rhema) so that when we pray, we will know what we are to pray for in line with His will. God wants us to be so close to Him that He can lean over and whisper His rhema for us in our ear. “The secret of the Lord is for those who fear Him, and He will make them know His covenant.” (Ps 25:14)

The foundation of prayer is knowing what God has already said. When we are taken to a passage in Scripture, when the words jump off the page at us, that’s when the Spirit gives us the rhema Word. It is those words we are to pray back to the Lord: “God, You said in Your Word…” But if we don’t spend time in God’s Word, in prayer asking for His direction, being still before the Lord awaiting His direction, how can we receive His rhema Word to take to Him in prayer? It shouldn’t be an expectation that it will just appear in our head, because if we aren’t seeking Him first, we might be hearing a very different voice–the one that seeks to devour us.

Paul’s instruction “pray at all times in the Spirit” uses the Greek word kairos, which has to do with a specific time, an opportune and appointed time. The appointed time he is referencing is “the evil day” when we need to resist the enemy. The “evil day” is the day when spiritual warfare is in your face and all hell is breaking loose. It’s at those times that the day demands the power of the armor connected with concentrated, specific prayer. “For we know that the whole creation groans and suffers the pains of childbirth together until now. And not only this, but also we ourselves, having the first fruits of the Spirit, even we ourselves groan within ourselves, waiting eagerly for our adoption as sons, the redemption of our body.” (Rom 8:22-23)

The Holy Spirit comes alongside us in those kairos moments, when we don’t think we can make it one more day, and ushers us into the very presence of God. And while in the throne room of God, the Spirit calls on the Father to do His will in our situation. An amazing illustration of the power of specific prayer in the Spirit based on God’s Word, and His response in the spiritual realm is found in Daniel 9-10. Daniel read God’s Word, and prayed His Word to Him, which is in the Spirit. While Daniel was praying, God sent an angel to Daniel to help him better understand His Word. “Then he said to me, ‘Do not be afraid, Daniel, for from the first day that you set your heart on understanding this and on humbling yourself before your God, your words were heard, and I have come in response to your words.'” (Dan 10:12)

Daniel didn’t just ask for clarification or for God to come through on His promise, he sought the Lord. He humbled himself, confessed his own sins and those of his nation, and sought the Lord–personally and relationally. “So I gave my attention to the Lord God to seek Him by prayer and supplications, with fasting, sackcloth and ashes.” (Dan 9:3) If we want God to intervene, we must seek Him, make confession of our sins and repent from worldliness, and He promises to draw near to us (James 4:8).

It’s important to note that the angel Gabriel was delayed in responding to Daniel by a demon (Dan 10:13-14); there was spiritual warfare in the heavenly realm of which Daniel was unaware. We can’t see the obstacles that Satan and his demons are putting up as a defense in the heavenlies, so we can’t assume God hasn’t heard or responded to us. So our prayers in asking for God’s intervention should also include asking Him to remove Satan from causing a delay in His answer. We are to pray with our eyes wide open to the enemy’s schemes: “and with this in view, be on the alert with all perseverance and petition for all the saints” (Eph 6:18b), because “Your adversary, the devil, prowls around like a roaring lion, seeking someone to devour” (1 Pet 5:8).

Because we base our prayers in our faith in God’s Word, His promises and His character, we thank Him for what He has promised to do as if it is already done. “Be anxious for nothing, but in everything by prayer and supplication with thanksgiving let your requests be made known to God. And the peace of God, which surpasses all comprehension, will guard your hearts and your minds in Christ Jesus.” (Phil 4:6-7) In our thanksgiving, He gives us His peace to guard our hearts and minds in Jesus. Standing firm in His Word, we have a peace even in chaos that protects us from enemy.

Part of the Series: The Authority of Christ (links will be added when they are published, and more may be added to the list as God leads)

One thought on “Pray At All Times in the Spirit”