The Lord Delivers Those Who Fear Him 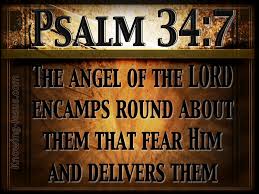 Are you afraid of anything right now? In Psalm 34 David wrote of being afraid of King Saul, who wanted to kill him because of the accolades David received for killing Goliath. His fear was so great he decided to live among the pagans, thinking he would be safe in worldliness (1 Sam 21-22). David seemed to have forgotten who delivered Goliath.

But then He stopped and remembered the Lord. “I sought the Lord, and He answered me; He delivered me from all my fears. Those who look to Him are radiant; their faces are never covered with shame. This poor man called, and the Lord heard him; He saved him out of all his troubles. The angel of the Lord encamps around those who fear Him, and He delivers them.” (Ps. 34:4-7)

David remembered to fear the Lord, and look to Him instead of his troubles. “Taste and see that the Lord is good; blessed is the one who takes refuge in Him. Fear the Lord, you His holy people, for those who fear Him lack nothing. The lions may grow weak and hungry, but those who seek the Lord lack no good thing.” (Ps 34:8-10)

Then he turns his attention on what it means to fear the Lord – obedience. “Come, my children, listen to me; I will teach you the fear of the Lord. Whoever of you loves life and desires to see many good days, keep your tongue from evil and your lips from telling lies. Turn from evil and do good; seek peace and pursue it.” (Ps 34:11-14)

Then David exclaims the benefits of obedience and cautions the consequences of disobedience. “The eyes of the Lord are on the righteous, and His ears are attentive to their cry; but the face of the Lord is against those who do evil, to blot out their name from the earth.  The righteous cry out, and the Lord hears them; He delivers them from all their troubles. The Lord is close to the brokenhearted and saves those who are crushed in spirit. The righteous person may have many troubles, but the Lord delivers him from them all” (Ps 34:15-19).

If today you find yourself in fear, remember to fear the Lord. “The Lord will rescue His servants; no one who takes refuge in Him will be condemned.” (Ps. 34:22)