Blessed Are Those Who Are Persecuted for Righteousness 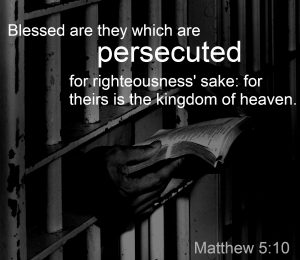 We have looked within ourselves to make room for Christ in us: We empty out our spiritual pride, mourn for our sin, become meek, hunger for the Lord’s righteousness, become merciful, become pure in heart, then become peacemakers. When we have progressed through the first seven beatitudes, we are promised that if we are persecuted for our faith, we will be blessed.  “Blessed are those who have been persecuted for the sake of righteousness, for theirs is the kingdom of heaven. Blessed are you when people insult you and persecute you, and falsely say all kinds of evil against you because of Me. Rejoice and be glad, for your reward in heaven is great; for in the same way they persecuted the prophets who were before you.” (Matt. 5:10-12)

Cultivating qualities described in the first three beatitudes (poor in spirit, mourning, and meekness) leads to the hunger and thirst described in the fourth. And in a similar way, application of the next three leads to the persecution found in the eighth. As we look outside of ourselves to offer mercy, live in purity, and make peace, the world will often reject us, just as it rejected Christ.

The promise for those who are persecuted is the same as that given to those who are poor in spirit: “theirs is the kingdom of heaven”. Though these words are spoken early in Jesus’ ministry, He can look ahead to the day when He will be tortured, spat upon, and crowned with thorns; the day when the world He came to redeem will crucify Him. He will endure it all “for the joy set before Him” (Heb. 12:2), and with this promise, He sets joy before His followers, too. For to be rejected by the world means that we are accepted by Christ, and honored by the Father just as Christ was honored for His obedience.

Jesus said, “Remember the word that I said to you: ‘A servant is not greater than his master.’ If they persecuted me, they will also persecute you. If they kept my word, they will also keep yours” (John 15:20). Before his conversion, Saul persecuted the early Church in Jerusalem, which scattered the Christians throughout the regions of Judea and Samaria (Acts 8:1). Even though these Christ followers had to run for their lives, they spread the gospel far and wide: “Those who had been scattered preached the Word wherever they went” (Acts 8: 4), living out the Great Commission (Matt. 28:16-20). Peter advised “if anyone suffers as a Christian, let him not be ashamed, but let him glorify God in that name” (I Peter 4:16).

Paul and Silas were imprisoned for speaking the Lord’s truth and saving a slave girl from being demon-possessed (Acts 16:16-30). Even though they were chained, they praised the Lord and their chains were broken by God’s mighty power. They were able to use the circumstance to bring the gospel to their jailer. Paul wrote that his chains encouraged others to be bolder for Christ (Phil. 1:12-14). Paul’s chains were intended to discourage evangelism, yet sharing the good news is precisely what God used them to accomplish–suffering is sometimes used to share the gospel!

We aren’t all called to be martyrs, but we are called to experience some measure of pain because of our faith. We are never closer to Jesus than when in pain for His name’s sake. Paul shared this with his “son” Timothy: “You, however, know all about my teaching, my way of life, my purpose, faith, patience, love, endurance, persecutions, sufferings—what kinds of things happened to me in Antioch, Iconium and Lystra, the persecutions I endured. Yet the Lord rescued me from all of them. In fact, everyone who wants to live a godly life in Christ Jesus will be persecuted” (2 Tim. 3:10-12).

Even when we are mistreated by others of this world for our faith, we aren’t walking alone. “We are afflicted in every way, but not crushed; perplexed, but not driven to despair; persecuted, but not forsaken; struck down, but not destroyed; always carrying in the body the death of Jesus, so that the life of Jesus may also be manifested in our bodies.” (2 Cor. 4:8-10) As we serve the Almighty Lord, we are ultimately victorious in Christ: “For this light momentary affliction is preparing for us an eternal weight of glory beyond all comparison” (2 Cor. 4:17). After all, “If God is for us, who can be against us?” (Rom. 8:31).