We Are Redeemed and Forgiven 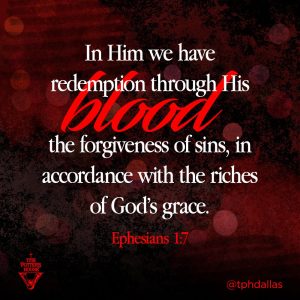 A few days ago we began to talk about our inheritance through our faith in Jesus Christ. So far we’ve discussed that we are blessed with every spiritual blessing, we are chosen to be holy and blameless in God’s sight, and we are adopted as God’s children. Today we will discuss the next two blessings in Ephesians 1: Redemption through His blood and Forgiveness of our sin. “In Him we have redemption through His blood, the forgiveness of our trespasses, according to the riches of His grace which He lavished on us.” (Eph 1:7-8)

According to Merriam-Webster, the definition of redeemed is “to free from captivity by payment of ransom”. As sinners we are spiritually bankrupt, and therefore are slaves to sin. Our redemption in Christ sets us free from the sin debt we have been placing on our account before God. Even though we have committed untold number of sins; even though we were in slavery to sin and even though the wrath of God was upon us, we have been released, and the chains of sin have been removed. “But God demonstrates His own love toward us, in that while we were yet sinners, Christ died for us.” (Rom. 5:8)

Old radio pastor J. Vernon McGee wrote, “I heard this story many years ago, and it’s the kind of story that you are not supposed to tell today, but I tell it because it illustrates a great truth. In the South, and I hate to say, in the days of slavery – there was a beautiful black girl who was put on the slave block to be sold. There was a very cruel slave owner, a brutal fellow, who began to bid for her. Every time he would bid, the girl would cringe and a look of fear would come over her face. A plantation owner there, observed what was happening and he began to bid for the girl. He finally outbid the other man and purchased her. He put down the price and started to walk away. The girl followed him, but he turned to her and said, ‘You misunderstand. I didn’t buy you because I need a slave. I only bought you to set you free.’”

That is the picture Paul is painting here in this verse. Jesus paid this price through His own blood, which was the price, or ransom, of our redemption. It was a sacrifice which cost Him His life, but provided life for us “according to the riches of His grace.” It is all by the free gift of God’s grace to each of us who do not deserve redemption. We have been “justified as a gift by His grace through the redemption which is in Christ Jesus” (Rom. 3:24). And as all our blessings in this chapter say, we have these blessings because we are in Christ. “But by His doing you are in Christ Jesus, who became to us wisdom from God, and righteousness and sanctification, and redemption” (1 Cor. 1:30).

Because Jesus Christ paid the ransom for us and by faith we are believers, our next blessing in Christ is that we are forgiven. And just like the slave girl who was purchased to be set free and her debt forgiven, so are we. Forgiveness is God’s pardon. The Greek word forgiveness is based on a verb meaning “to send away.” “For as high as the heavens are above the earth, so great is His love for those who fear Him; as far as the east is from the west, so far has He removed our transgressions from us.” (Ps. 103:11-12)

Forgiveness is not God saying, “Oh, that’s okay.” Nor is it God saying, “It’s no big deal.” In fact, the cost of our forgiveness was a great one to God, the death of Christ on the cross. In a sense, forgiveness is the flip side of redemption. When God redeems us, He releases us from bondage to sin and death. When God forgives us, He sends away the penalty that stands against us, releasing us from its grip on us. The good news of Ephesians 1:7 is that God both redeems and forgives us through the death of Christ.

Since we are forgiven and are no longer slaves to sin, we aren’t to live as if we are. We are to live as set free, redeemed and forgiven. We have a clean slate–we are set apart and every day His mercies are new. He is faithful and will not fail us. There is no condemnation for those in Christ Jesus (Rom. 8:1). When we don’t walk in the fullness of Christ Jesus, we are impotent for His kingdom. We should walk confidently that we are not condemned, and that instead we are in Christ.

The Father didn’t forgive us from the riches of His grace but “according to the riches of His grace”. It’s like this, John D. Rockefeller at one time was known as the richest man in the world. He liked to have his picture taken as he would do good things with some of his money. As he knelt down to give a poor child a quarter the press would snap a picture. Rockefeller was giving from his riches when he gave a quarter. Although he had much, his riches were finite. The Father gives His children not from His riches but according to His riches, and His wealth is infinite. He doesn’t divide it up among His children or hand us a quarter for being good; He gives it all to us, “He lavished [His grace] on us”. He has redeemed us by the blood ransom of Jesus Christ, He has forgiven us, and He lavishes His grace upon us according to His riches. As you take a step today, walk confidently in Christ because that is WHO we are!