Living Our Lives In God’s Power 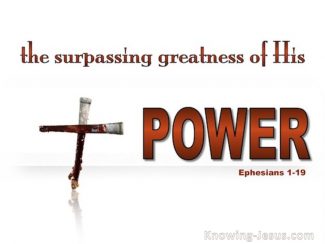 For us to live our lives in the Lord’s power, we need to know that the Lord has power over all things, and that He is ultimately in charge. One story that illustrates this is the faith of a Roman centurion (Matthew 8:5-13). This man understood that he was under the power of another, and that he held the power over 100 soldiers, and his own servants. With his carnal knowledge he understood that we all are under the authority of another. He also understood that ultimately we are all under God’s authority. The centurion came to Jesus to ask for help for his servant who was at home paralyzed and suffering terribly. Jesus asked if He should go to the servant to heal him.

The centurion’s response showed his faith in the Lord’s authority based on who He is. “The centurion replied, ‘Lord, I do not deserve to have you come under my roof. But just say the word, and my servant will be healed. For I myself am a man under authority, with soldiers under me. I tell this one ‘Go,’ and he goes; and that one, ‘Come,’ and he comes. I say to my servant, ‘Do this,’ and he does it.’ When Jesus heard this, He was amazed and said to those following Him, ‘Truly I tell you, I have not found anyone in Israel with such great faith.’ (Matt. 8:8-10)

Jesus used this moment before saying the Word to heal the servant in order to teach that belief in Him is the only way to the Father: “I say to you that many will come from the east and west, and will take their places at the feast with Abraham, Isaac and Jacob in the kingdom of heaven. But the subjects of the kingdom will be thrown outside, into the darkness, where there will be weeping and gnashing of teeth.” (Matt. 8:11-12) We don’t get to the Father based on our family inheritance, the only way to the Father is through faith in Jesus. He is the way, the truth and the life (John 14:6).

And the Lord gave him what he asked based on his faith. “Then Jesus said to the centurion, ‘Go! Let it be done just as you believed it would.’ And his servant was healed at that moment.” (Matt. 8:13). The centurion believed that Jesus was the Son of God, and held the power of the Lord to heal with only His Word. He had faith, and faith is a choice.

If you believe by faith that Jesus is the Son of the One True God, then you have His Spirit upon you. For we are told that we “will receive power when the Holy Spirit comes on you” (Acts 1:8). Knowing that we have the Spirit living in us because of our faith in Jesus, we know we can “approach God’s throne of grace with confidence, so that we may receive mercy and find grace to help us in our time of need.” (Heb. 4:16) Just like the believers who earnestly prayed for Peter after James had been put to death by sword and Peter was arrested. God responded to their prayers and sent His angel to rescue Peter (Acts 12:1-17).

Do you have that kind of faith? “I pray that the eyes of your heart may be enlightened in order that you may know the hope to which He has called you, the riches of His glorious inheritance in His holy people, and His incomparably great power for us who believe. That power is the same as the mighty strength He exerted when He raised Christ from the dead and seated Him at His right hand in the heavenly realms” (Eph 1:18-20). I have come to understand His power more and more each day as my faith increases. And because of His power and His authority over everything, I know when I humbly seek Him in prayer, He hears me and has the power to change my life if I submit to His changing work within me. I am choosing by faith to live in His power.