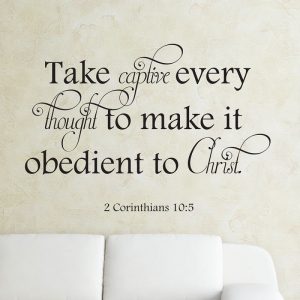 Although I have been in the grace of God since I was 9, I haven’t always lived my life in His victory through His cleansing blood and in the power of the resurrection. Truth be told, even when I came back into the fold and was back in church and in a Bible study, I lived behind a wall of thick stone that I erected from my own shame. I was trying to do what I thought I should do, but I was doing it on my own power and I was failing, I was weary, I was constantly being offended by others. The bottom line is that I wasn’t looking to Jesus, I was looking out for myself and living in worldliness, not in victory in Jesus. The Lord called me to ask Him to tear down this wall and to lay my burdens at the foot of His cross and leave them there. “Come to me, all you who are weary and burdened, and I will give you rest.” (Matt. 11:28)

As I told you yesterday, I relate to Peter. He was more concerned with his own will and perceived needs than in the Father’s will (Mark 8:31-33). When Peter rebuked Jesus for saying that He would die and then be resurrected, Jesus had to rebuke Peter, “’Get behind me, Satan!” He said. ‘You do not have in mind the concerns of God, but merely human concerns.’” In this instance, Peter was looking to his own needs and he wasn’t asking for the Lord’s will and what the Lord wanted. I admit that I have lived far too much of my life that way.

Yesterday while talking with a dear friend she remarked what a transformation she has seen in me that brings her great joy. I have softened. I am still a smart-aleck, still quick with a witty retort, but I no longer do it to “get someone before they get me”, it is just part of who I am. But the difference? I’ve let love in; the walls are down; and when I am tempted to become offended by what someone does or says, instead I take it to the Lord. “We demolish arguments and every pretension that sets itself up against the knowledge of God, and we take captive every thought to make it obedient to Christ.” (2 Cor. 10:5)

You know what I’ve found out? It is the enemy trying to erect those walls again, trying to put me back to the same offended person who was ready to offend. The bottom line the enemy wants to make my testimony useless for the Lord. And here’s what I have learned this year, I must keep my eyes on the Lord (not my own perceived needs) and rebuke Satan in the name of Jesus when I feel my old self coming back. Don’t let Satan steal your testimony, for if he does, he’ll rob you of your joy and leave you without any hope or strength! We must keep our eyes on the Lord and realize that a battle wages, and we can’t visually see all the players. “For our struggle is not against flesh and blood, but against the rulers, against the authorities, against the powers of this dark world and against the spiritual forces of evil in the heavenly realms.” (Eph. 6:12)

I don’t know what you are going through in this moment, but I encourage you to ask the Lord to search your heart and to tell you if you are focusing on yourself and the world, or are you looking to the Lord. It’s important to know where you are looking because even (and especially) as a child of Christ, we are pawns in a battle. “For though we live in the world, we do not wage war as the world does. The weapons we fight with are not the weapons of the world. On the contrary, they have divine power to demolish strongholds. We demolish arguments and every pretension that sets itself up against the knowledge of God, and we take captive every thought to make it obedient to Christ.” (2 Cor. 10:3-5)

I choose to follow Jesus and live in His victory. “But thanks be to God! He gives us the victory through our Lord Jesus Christ.” (1 Cor. 15:57) I am able to recognize rather quickly when the devil is turning my thoughts to myself and worldliness because I stay in God’s Word and pray, and listen. We all have a choice to make as to how we will live. “Now therefore fear the Lord and serve Him in sincerity and in faithfulness…choose this day whom you will serve…But as for me and my house, we will serve the Lord.” (Joshua 24:14-15)

One thought on “Taking Every Thought Captive”