Do You Wait On The Lord Or Depend On Yourself? 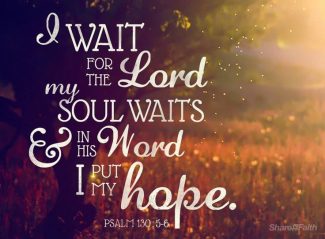 The title of this post has me shaking my head because WAY too often in my life, I’ve just moved forward in what I thought I should do (and to be honest, sometimes I didn’t think at all) without stopping to ask the Lord what He wanted me to do. As I have discussed in the last couple of weeks, it didn’t always go well with me. Rejecting the will of my Lord and Savior was flat out sin. “For God did not call us to be impure, but to live a holy life. Therefore, anyone who rejects this instruction does not reject a human being but God, the very God who gives you His Holy Spirit.” (1 Thess 4:7-8)

In my Bible study yesterday in Into the Word: 52 Life-Changing Bible Studies for Individuals and Groups

, I was asked a question, “Who has suffered as a result of your sin?” and “Do you think sin is ever confined exclusively to one person or does it affect others?” I continue to ponder those questions, without jumping in and giving an answer off the top of my head. These questions were asked in relationship to a part of Abrahm’s story that I touched on briefly yesterday. “Now there was a famine in the land, and Abram went down to Egypt to live there for a while because the famine was severe.” (Gen. 12:10) We aren’t told that the Lord told him to go to Egypt; and we aren’t told that Abrahm asked the Lord for direction. He just went because in his finite human understanding, there wasn’t food where he was while Egypt had food.

So in this story Abrahm did what I’ve done for much of my life, he was self-directing what he thought might be a good idea. And then he just kept on with his own human direction, not only planning to sin himself by lying and scheming, but bringing in his wife on the sin. “As he was about to enter Egypt, he said to his wife Sarai, ‘I know what a beautiful woman you are. When the Egyptians see you, they will say, ‘This is his wife.’ Then they will kill me but will let you live. Say you are my sister, so that I will be treated well for your sake and my life will be spared because of you.’” (Gen. 12:11-13) Oh what a tangled web we weave when we first practice to deceive!

“When Abram came to Egypt, the Egyptians saw that Sarai was a very beautiful woman. And when Pharaoh’s officials saw her, they praised her to Pharaoh, and she was taken into his palace. He treated Abram well for her sake, and Abram acquired sheep and cattle, male and female donkeys, male and female servants, and camels.” (Gen 12:14-16) On the surface, it seems as though Abrahm did what was “needed” and he prospered because of it. But Abrahm was living a lie, and for lack of a better phrase, he “pimped out” his wife for his earthly benefit–the promised mother of God’s chosen nation.

“But the Lord inflicted serious diseases on Pharaoh and his household because of Abram’s wife Sarai. So Pharaoh summoned Abram. ‘What have you done to me?’ he said. ‘Why didn’t you tell me she was your wife? Why did you say, ‘She is my sister,’ so that I took her to be my wife? Now then, here is your wife. Take her and go!’ Then Pharaoh gave orders about Abram to his men, and they sent him on his way, with his wife and everything he had.” (Gen 12:17-20) It seems as though the Lord’s wrath was only inflicted on Pharoah and his household. But as we continue to read the story of Abrahm, we see that this isn’t so.

While living the lie, Abrahm acquired a lot of property that did not come as a blessing from the Lord, and Abrahm’s problems began with quarreling so that Abrahm and his nephew Lot had to separate (Genesis 13:5-7); and because they were separated, Abrahm had to rescue Lot (Genesis 14:13-24). Abrahm had reconciled with the Lord, but being forgiven doesn’t mean that we will not suffer consequences. And there are more consequences to see as we continue Abrahm’s story.

I don’t currently know the answer to the questions I’ve been pondering since yesterday. But what I have learned in the story of Abrahm (and what I’ve already experienced in my life), self-directing myself is NOT a good idea. Instead I will seek direction from the Lord. “Teach me your way, Lord, that I may rely on your faithfulness; give me an undivided heart, that I may fear your name.” (Ps. 86:11) And if I do not hear an answer right away? “I wait for the Lord, my whole being waits, and in His Word I put my hope. I wait for the Lord more than watchmen wait for the morning, more than watchmen wait for the morning.” (Ps. 130:5-6)