Total Surrender To The Lord 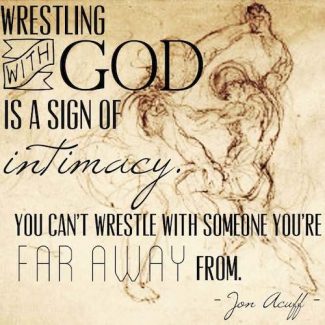 We have been looking into the five warnings in Hebrews for Christians and giving our burdens to the Lord in the last week. All of these posts are about establishing or re-establishing a one-on-one relationship with our Lord, and letting go of anything that hinders that relationship. “Therefore, since we are surrounded by such a great cloud of witnesses, let us throw off everything that hinders and the sin that so easily entangles. And let us run with perseverance the race marked out for us, fixing our eyes on Jesus, the pioneer and perfecter of faith. For the joy set before Him He endured the cross, scorning its shame, and sat down at the right hand of the throne of God. Consider Him who endured such opposition from sinners, so that you will not grow weary and lose heart.” (Heb. 12:1-3)

Believers have been taught there are two crossings in the life of a Christian – the Red Sea and the Jordan. The Red Sea crossing represents coming out of the world. It speaks of a new start. It symbolizes “getting saved”. A lot of God’s people come out of Egypt, but they never get into the Promised Land. They get stuck in the wilderness of unbelief, fear, and confusion. They leave the world but never enter the joy of the Lord.

Crossing the Jordan represents a commitment to go on with the Lord, with a desire to grow in Christ! The children of Israel who entered their Promised Land received their inheritance. But they never did enter into the rest God wanted them to have as they still had sin in their hearts!

How tragic that the same is true today. Many Spirit-filled, Spirit-led believers have never known the true rest of God! God said about Israel “That is why I was angry with that generation; I said, ‘Their hearts are always going astray, and they have not known my ways.’ So I declared on oath in my anger, ‘They shall never enter my rest.” (Hebrew. 3:10-11)

Only God knows how many Christians carry the burden of a secret sin or overwhelming lust. Our peace may be disturbed by a troubled conscience, and we have never experienced total victory and deliverance from besetting sins. We dearly love the Lord – but there is “this one thing in our lives” that we hate, but we keep doing. Is there no place of absolute victory; no freedom from giving in to lust?

There is a third crossing: Jabbok is where God deals with the “Jacob” in us (the sin we are holding back from God), where He not only deals with our sin, but our very character. “So Jacob was left alone, and a man wrestled with him till daybreak.” (Gen. 32:24) You can cross the Red Sea with a mighty host of the redeemed who leave Egypt. You can cross the Jordan with the victorious army of the Lord all about you. But you will cross Jabbok alone! This is your private battle – between you and the Lord alone.

Jacob was desperate. He was returning after many years, to claim his inheritance. Esau, the brother he had swindled the birthright from, was coming in his direction with an army of 400 men. Jacob had matured in many ways; he was obedient to the Lord, following the Lord’s command to return home. He was a humble, praying man. “I am unworthy of all the kindness and faithfulness you have shown your servant…” (Gen. 32:10).

But this humble, obedient, praying, and God-fearing servant of God was still into appeasement. Instead of trusting God in his crisis, he worked angles. He would bombard Esau with wave after wave of gifts of goats, camels, bulls, sheep, donkeys, and rams to soften his brother’s heart. “Jacob thought, ‘I will try to appease him by sending gifts ahead of me.'” (v. 20) When we appease someone or a situation, we are scheming like Jacob did. We have not totally yielded ourselves to the total Lordship of Christ, and are not fully trusting Him.

“So Jacob was left alone, and a man wrestled with him till daybreak.” (v 24) Was this a man that God sent, was this an angel? Whatever the interpretation, Jacob was in the presence of the Lord, and Jacob was forced to expose himself, and see himself for what he was. All night long the battle raged. This time Jacob wanted to be free. He wanted to look the Lord in the eye and know he was honest and holy. He wanted deliverance.

“‘What is your name?’ the man asked. He replied, ‘Jacob.'” (Gen. 32:27) Jacob knew his name stood for “heel grabber”, one who cheats his brother, himself, and tries to hide it from God. What the Lord was saying to Jacob was this: “Look at yourself – what you’ve become! Face the truth or there will be no victory!” When the Lord lays your sin upon your heart, it’s time to lay out the truth without justification or excuses, and wrestle with the Lord for deliverance from your sin.

There comes a time when God can no longer keep back the wages of your sin! There is a law that states “These desires [lusts] give birth to sinful actions. And when sin is allowed to grow, it gives birth to death.” (James 1:15) No matter how blessed you are, God will not permit an open-ended license to go on sinning! You must obey or be exposed – and begin to reap what you have sown. Not that His grace is withdrawn, or His love and mercy limited. When the Lord gets our attention with our burden of sin, He is giving us an opportunity to free ourselves from the burden, and instead take it to the Cross. Jesus said: “Come to me, all you who are weary and burdened, and I will give you rest.” (Matt. 11:28)

When we fully give ourselves to the Lord, Christ delivers us from our stronghold sins by changing our very character. “Your name will no longer be Jacob,” the man told him. “From now on you will be called Israel, because you have fought with God and with men and have won.” (32:28) Jacob now knew it was within his power to obey, because the Lord accepted his commitment to surrender. “But He said to me, ‘My grace is sufficient for you, for my power is made perfect in weakness.’ Therefore I will boast all the more gladly about my weaknesses, so that Christ’s power may rest on me.” (2 Corinthians 12:9)

Our Lord wants us not only to gain victory over sins, He wants to change us into new people with pure hearts and clean hands. “Therefore, if anyone is in Christ, the new creation has come: The old has gone, the new is here!” (2 Cor 5:17)

The Lord is urging me to come clean with Him, to give Him the reins and allow Him to change my character. Is He speaking to you?