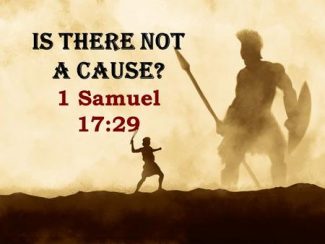 We are continuing uncovering the five truths about our enemy from “What My Enemy Does” in Spiritual Warfare for Women: Winning the Battle for Your Home, Family, and Friends.

In 1 Samuel 17:26-29, David asked the men standing near him what would be done for the soldier brave enough to take Goliath down. When his eldest brother, Eliab, heard David’s conversation he “burned with anger” and asked: “Why have you come down here? And with whom did you leave those few sheep in the wilderness? I know how conceited you are and how wicked your heart is; you came down only to watch the battle.” Remember this is the same Eliab that Samuel thought would be God’s chosen king, but God said, “Do not consider his appearance or his height, for I have rejected him. The Lord does not look at the things people look at. People look at the outward appearance, but the Lord looks at the heart.” (1 Sam 16:7)

While there was no doubt jealousy on Eliab’s part, this was obviously not the first time that he rebuked and ridiculed David, as we can see from David’s reply: “Now what have I done?’ said David. ‘Can’t I even speak?'” (v 29)

Do you have people in your life that seem to pounce on rebuke, especially when you least expect it? I have a few like that, and one that is even a close friend. You can bet the devil is using them to pounce on your weakness and put you out of commission. Our enemy plays dirty!

If our enemy can’t get us distracted by intimidation, then he’ll look for the weak chink in our armor and try to penetrate us where it hurts. He’ll find our greatest insecurity and try to expose it. David had been annointed by Samuel as God’s next king, but he was still tending to sheep. It must have been difficult for him to be faithful in the small things while he waited for God to show him what He wanted him to do. I’m sure that was a sore spot with David, so it was the very thing that the enemy chose to expose.

So what did David do when confronted with exposing his weakness? “He then turned away to someone else and brought up the same matter, and the men answered him as before.” (v 30) When he uses a family member or close friend to attack your weakness, do what David did and turn away to someone else. Stay focused on what God has told you to do. Sometimes you win your greatest battles by turning away from the enemy’s distraction and staying focused on what God has called you to do.