3 Sure Signs of a False Apostle 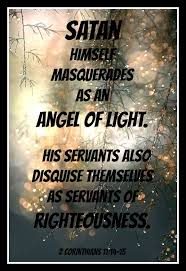 It seems most days I come across warnings to discern the truth of God’s Word and to watch out for false prophets and doctrine. That’s why you’ve been seeing so much of this in my daily blog. People want their ears tickled; they want to read and quote the parts of the Bible they agree with (usually that makes the point of their worldliness), but here we talk about the truth in the Word of God. I genuinely hope the Holy Spirit is using what you are reading here to speak to your heart.

Since the 1990s, we’ve been witnessing the Lord restoring the office of the apostle to the church. Of course, the rise of true ministry gifts always prompts Satan to raise up a counterfeit anointing to pervert the pond.

The Bible warns of false apostles, and I’ve certainly seen my fair share of them. But what does a false apostle look like? How do you recognize them? What does Scripture really say about these hucksters?

I decided to study this out after I saw several articles online arguing Paul, who wrote two-thirds of the New Testament, was a false apostle. Between such odd assertions and the number of people claiming to be apostles without any evident fruit, I set out like a good Berean to offer some truth on false apostles.

Yes, There Are Modern-Day Apostles

Before we get into the signs of a false apostle—and this is just part one in a series—let’s start off with a foundational Scripture to set the stage. Ephesians 4:11-14 makes the case for modern-day apostles: “He gave some to be apostles, prophets, evangelists, pastors, and teachers, for the equipping of the saints, for the work of service, and for the building up of the body of Christ, until we all come into the unity of the faith and of the knowledge of the Son of God, into a complete man, to the measure of the stature of the fullness of Christ, so we may no longer be children, tossed here and there by waves and carried about with every wind of doctrine by the trickery of men, by craftiness with deceitful scheming.”

Nowhere in Scripture does it say Jesus has stopped calling apostles, prophets, evangelists, pastors and teachers. I am not offering sign of false apostles based on my experience with them, as that’s subjective and can start a witch hunt. The Bible has plenty to say on its own without inserting our opinions at this point.

1. False apostles boast about themselves. They are braggarts. Paul longed to impart spiritual gifts to help establish people in what God was calling them to do (Rom. 1:11). False apostles seek to puff themselves up in your eyes so they can get something from you rather than adding something to your life. Paul wrote, “And I will continue doing what I am doing, that I may cut off the opportunity from those who desire an opportunity to be found equal to us in what they boast about. For such are false apostles, deceitful workers, disguising themselves as apostles of Christ.” (2 Cor. 11:12-13).

Proverbs 27:2 says, “Let another man praise you, and not your own mouth; a stranger, and not your own lips.” Now, it’s absolutely legitimate to offer stories and testimonies of the power of God because it builds people’s faith. But false apostles are more interested in puffed-up power stories that exalt themselves rather than glorifying Christ and building your faith in Him. It can be a fine line, but the line is there.

2. False apostle are merchandisers. What was Paul speaking about in 2 Cor. 11:12? What was he going to continue to do in order to cut off opportunity from the false apostles who wanted equal status with Paul and his true apostolic company? He was preaching the gospel free of charge. “Did I commit a sin in abasing myself that you might be exalted, because I preached to you the gospel of God free of charge? I robbed other churches by accepting wages from them to serve you. Furthermore, when I was present with you and was lacking, I was a burden to no one” (2 Cor. 11:7-9).

In context of those who brag and merchandise people, Paul wrote, “For such are false apostles and deceitful workers, disguising themselves as apostles of Christ. And no wonder! For even Satan disguises himself as an angel of light. Therefore it is no great thing if his ministers also disguise themselves as ministers of righteousness, whose end will be according to their works” (2 Cor. 11:13-15).

The Greek word for “deceitful” in this verse means just that: deceitful. False apostles are not merely people who take on a title without the gift, the calling or the fruit. They may be sincere and misguided—but that doesn’t make them false. False apostles are those who set out to deceive.

I pray that the Lord would sharpen your discernment in these last days, to recognize these deceitful workers; to avoid labeling the false as true and the true as false; and to rightly divide the word of truth, in Jesus’ name. Amen.

Source: 3 Sure Signs of a False Apostle by Jennifer LeClaire