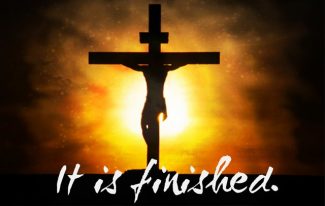 The cross was the goal of Jesus from the very beginning. His birth was so there would be His death. The incarnation was for our atonement. He was born to die so that we might live. And when He had accomplished the purpose He had come to fulfill, He summed it up with a single word: finished.

In the original Greek, it was a common word. Jesus probably used it after He finished a project that He and Joseph might have been working on together in the carpentry shop. Jesus might have turned to Joseph and said, “Finished. Now let’s go have lunch.” It is finished. Mission accomplished. It is done. It is made an end of.

Also finished was Satan’s stronghold on humanity. Jesus came to deal a decisive blow against the devil and his demons at the cross of Calvary. Hebrews 2:14 says, “That through death he might destroy him who had the power of death, that is the devil.” This means that you no longer have to be under the power of sin. Because of Jesus’ accomplishment at the cross, finished was the stronghold of Satan on humanity.

And lastly, finished was our salvation. It is completed. It is done. All of our sins were transferred to Jesus when He hung on the cross. His righteousness was transferred to our account.

So Jesus cried out the words, “It is finished!” It was God’s deliberate and well-thought-out plan. It is finished—so rejoice!