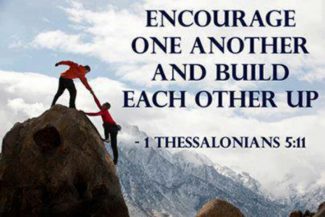 Every group needs and “encourager” because everyone needs encouragement at one time or another. However, the value of encouragement is often missed because it tends to be private rather than public. In fact, people most need encouragement when they feel most alone. A man named Joseph was such an encourager that he earned the nickname “Son of Encouragement”, or Barnabas, from the Jerusalem Christians.

Barnabas was drawn to people he could encourage, and he was a great help to those around him. It is delightful that wherever Barnabas encouraged Christians, non-Christians flocked to become believers!

Barnabas’ actions were crucial to the early church. In a way, we can thank him for most of the New Testament. God used his relationship with Paul at one point and with Mark at another to keep these two men going when either might have failed. Barnabas did wonders with encouragement.

When Paul arrived in Jerusalem for the first time following his conversion, the local Christians were understandably reluctant to welcome him. They thought his story was a trick to capture more Christians. But Barnabas proved willing to risk his life to meet with Paul and then convince the others that their former enemy was now a vibrant believer in Jesus. We can only wonder what might have happened to Paul without Barnabas.

It was Barnabas who encouraged Mark to go with him and Paul to Antioch. “When he (Barnabas) arrived and saw this evidence of God’s blessing, he was filled with joy, and he encouraged the believers to stay true to the Lord. Barnabas was a good man, full of the Holy Spirit and strong in faith. And many people were brought to the Lord.” (Acts 11:23-24) Barnabas presents a wonderful example of how to help new Christians. He demonstrated strong faith; he ministered joyfully with kindness and encouragement; he taught new believers further lessons about God. Remember Barnabas when you see new believers, and think of ways to help them grow in their faith.

Mark joined them on their first missionary journey, but decided during the trip to return home. Later, Barnabas wanted to invite Mark to join them for another journey, but Paul would not agree. As a result, the partners went separate ways, Barnabas with Mark and Paul with Silas. This actually doubled the missionary effort. Barnabas’s patient encouragement was a huge boost for the effectiveness of Mark’s eventual ministry. Paul and Mark were later reunited in missionary efforts.

As Barnabas’s life shows, we are rarely in a situation where there isn’t someone we can encourage. Our tendency, however, is to criticize instead. It may be important at times to point out someone’s shortcomings, but before we have the right to do this, we must build that person’s trust through encouragement. “Therefore encourage one another and build each other up, just as in fact you are doing.” (1 Thess. 5:11)

Are you prepared to encourage those with whom you come into contact today?

Ambassadors for Christ, Be a Blessing, Bear With One Another, Build Each Other Up, Children of Light, Chosen, Commit to the Lord, Community, Compassion, Delight in the Lord, Deny Self, Encouragement

One thought on “Everyone Needs Encouragement”