Be Humble or Be Humbled 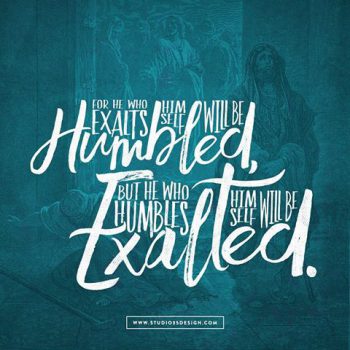 Last night a Scripture popped into my head, “For all those who exalt themselves will be humbled, and those who humble themselves will be exalted.” (Luke 14:11) I went to bed thinking on this and it was one of my first thoughts this morning. How many times do I think I deserve (fill in the blank), and become disappointed or frustrated when I don’t receive the accolades I think I deserve? When I feel this way, I am being prideful – full of myself – just like the Pharisees Jesus was talking with in Luke 14:7-13 after “He noticed how the guests picked the places of honor at the table”. Jesus taught that pride – thinking of ourselves better than we really are, seeing our faults in faint black and white rather than in vivid color, and assuming the worst in others while assuming the best in ourselves – was a real stumbling block to entering the kingdom of God. Instead, Jesus insisted upon the necessity of humility to enter the kingdom of God. This is what He taught in the parable of the wedding feast. It is better for others to recognize who you are than to suggest to them your ‘proper’ (or improper!) place. Humility is the best course in all affairs.

Proverbs 25:6-7 speaks the same truth, “Do not exalt yourself in the king’s presence, and do not claim a place among his great men; it is better for him to say to you, “Come up here,” than for him to humiliate you before his nobles.”  A well-known incident in the life of General Robert E. Lee occurred while that southern gentleman was riding on a train to Richmond, VA. The general was seated at the rear, and all the other places were filled with officers and soldiers. An elderly woman, poorly dressed, entered the coach at one of the stations. Having no seat offered to her, she trudged down the aisle to the back of the car. Immediately, Lee stood up and gave her his place. One man after another then arose to give the general his seat. “No, gentlemen,” he said, “If there is none for this lady, there can be none for me!” General Lee knew that good manners and humility demand consideration for people in all walks of life, not merely for those of high social ranking like himself.

The story of General Lee illustrates the end of the parable. Jesus ends this parable with, “Then Jesus said to his host, ‘When you give a luncheon or dinner, do not invite your friends, your brothers or sisters, your relatives, or your rich neighbors; if you do, they may invite you back and so you will be repaid. But when you give a banquet, invite the poor, the crippled, the lame, the blind, and you will be blessed. Although they cannot repay you, you will be repaid at the resurrection of the righteous.'”

Humility is facing the truth. It is useful to remind ourselves that the word itself comes from humus, earth, and in the end simply means that we allow ourselves to be earthed in the truth that lets God be God, and ourselves his creatures. If we hold on to this it helps prevent us from putting ourselves at the center, and instead allows us to put God and other people at the center.

Our Lord was not concerned that His hearers merely learn to take the lower seat so they would avoid embarrassment and then achieve high human honor when they were ostentatiously ushered from the lowest seat to the highest. Neither was He teaching the Pharisees and scribes to put on a staged humility, so they would be greatly honored above their peers. Jesus hated the pride that pretends to be humble. Rather, He was imparting an eternal spiritual principle that will be evident in the end when everything is made right.

Jesus’ point is that people who exalt themselves – who think that they are good enough to stand before God based on their own merits – the Final Judgment will be a total humiliation. They will not get what they think they deserve; they will get what God says they deserve. Norval Geldenhuys comments, “Just as at a wedding feast the occupying of seats of honor does not depend on a person’s self-assertive attitude but on the discretion of the host, so also a place of honor in the kingdom of heaven does not depend on self-assertiveness or on a man’s opinion of himself but on the righteous judgment of God.” For Jesus said, “The greatest among you will be your servant.” (Matt. 23:11) Service is more important in God’s kingdom than status. Jesus told the host not to be exclusive about whom he invites, after all the Lord opens His kingdom to all who will believe.

Abiding in God, Biblical Truth, Called, Character, Chosen, Commit to the Lord, Deny Self, Discipleship, Faith in Action, God is our King, God's Authority, Grace, Honor, Hope, Humble Ourselves, Humility, Jesus is the only way, Kingdom Agenda, Life Under God, Pride, Servant, Serving Others, Stumbling, Submission, Surrender to God, Take Up Our Cross