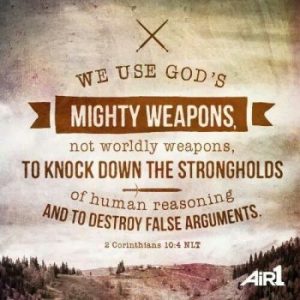 Feeling bullied? Are others trying to fit you into their mold of worldliness? Are giant-sized problems looming before you? Welcome to David’s world. When he boldly claimed that he would fight Goliath, his brother Eliab assaulted him with dispiriting remarks. But David simply defended his position and then walked away.

King Saul told David he was no match for Goliath. But David, remembering how God had helped him in the past, responded with “The Lord who rescued me from the paw of the lion and the paw of the bear will rescue me from the hand of this Philistine.” (1 Sam. 17:37)

The resigned Saul then tried to fit David into his battle gear–an uncomfortable fit for a shepherd boy. So David shed the armor, along with Saul’s sword, and picked up his usual weapons–a sling shot and some stones. The Philistine giant mocked David, but David replied, “You come against me with sword and spear and javelin, but I come against you in the name of the Lord Almighty, the God of the armies of Israel, whom you have defied. This day the Lord will deliver you into my hands,” (1 Sam. 17:45-46a)

Possibly there is a foolhardiness in youth who haven’t learned that something cannot be accomplished, but perhaps there is great strength in not listening to the nay-sayers who want to tell you that something cannot be done. We, like David, can refuse to allow the world’s discouragers, naysayers, and giants to affect us. We, too, can walk forward in God’s name and power. He will help us vanquish every negative word, thought, and deed–and lead us to triumph! “For though we live in the world, we do not wage war as the world does. The weapons we fight with are not the weapons of the world. On the contrary, they have divine power to demolish strongholds. We demolish arguments and every pretension that sets itself up against the knowledge of God, and we take captive every thought to make it obedient to Christ. And we will be ready to punish every act of disobedience, once your obedience is complete.” (2 Cor. 10:3-6)

We have a choice: do we listen to the world’s naysayers or do we listen to the Lord? Do we walk in the path that men set forth, or do we walk the path that the Lord shows us? To walk on the Lord’s path, we must submit every area of our lives so that we are living under God’s influence and not Satan’s control. We curb our sinning and ask forgiveness for those sins we’ve committed. “Submit yourselves, then, to God. Resist the devil, and he will flee from you.” (James 4:7) And then the Lord will slay the giants. “This is what the Lord says: ‘Do not be afraid! Don’t be discouraged by this mighty army, for the battle is not yours, but God’s.'” (2 Chron. 20:15b) A final thought:  David learned that one plus God is always a majority, no matter how big the enemy–something every generation must also learn.