Who Can Count the Apples in a Seed? 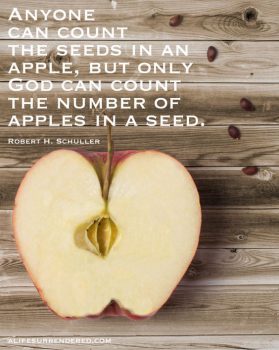 When I sold for a cosmetics company years ago, I remember being taught that each person had a reach of 250+ people – co-workers, family, friends, friends of friends, people you see at shopping establishments you frequent, people who work in the same building, and the list goes on and on. We were encouraged to engage with these people to gain customers so that we could sell our products. I don’t know of anything that the world needs more than Jesus. The devotional I am sharing below from Dr. Harold Sala shows how many lives we can truly touch.

The first thing Andrew did was to find his brother Simon and tell him, ‘We have found the Messiah’ (that is, the Christ). And he brought him to Jesus.” (John 1:41-42) His brother was Simon Peter, upon whom Jesus built His church.

“You can count the apples on the tree, but who can count the apples in a seed?” so goes the old saying. So is it with the influence of a single person. Take Edward Kimball, for example. Kimball was a Sunday school teacher who not only prayed for the often rowdy boys in his class, but sought to win each one to the Lord. If Kimball ever felt like giving up, he never talked about it. But, human nature being what it is, the thought must have come to him more than once. One young man, in particular, didn’t seem to understand what the Gospel was about, so Kimball went to the shoe store where the lad was stocking shelves and in a back room confronted him with the importance of a personal relationship with Jesus Christ.

That young man was the evangelist Dwight L. Moody, and on that Saturday, he accepted Jesus Christ as his Savior. In his lifetime, Moody touched two continents for God, with untold thousands coming to faith in Jesus Christ. But the story doesn’t end there. Actually, that’s where it begins.

Under Moody, another man’s heart was touched for God, Wilbur Chapman, and Chapman became an evangelist who preached to thousands. One day a professional ball player had a day off and attended one of Chapman’s meetings, and thus Billy Sunday was converted. Sunday quit baseball and became part of Chapman’s team. Then Chapman accepted the pastorate of a large church and Sunday began his own evangelistic crusades.

Beginning to understand why you can’t count the apples in a seed? Under Sunday’s ministry, another young man was converted whose name was Mordecai Ham—a scholarly, dignified gentleman who wasn’t above renting a hearse and parading it through the streets advertising his meetings.

When Ham came to Charlotte, North Carolina, a sandy-haired, lanky young man, then in high school, vowed that he wouldn’t go hear him preach, but “Billy Frank,” as he was called by his family, did eventually go. Billy Frank—eventually known to the world as Billy Graham—decided to go see what would happen.

What happened that night was that Billy Graham went and was intrigued by what he heard. Returning another night, he responded to the invitation and was converted.

Billy Graham has preached to more men than any other person who ever lived, including the Apostle Paul; and this fascinating chain of events was triggered by a Sunday school teacher’s concern for his boys.

Are you ever tempted to think that what you are doing doesn’t count? That nobody pays any attention to you, and that nobody is listening, whether you are a Sunday school teacher, a pastor, or a mother such as the one who talked to me, saying, “I keep on trying to tell my children about the Lord, but I don’t think they ever hear me.”

The fact is that God doesn’t depend on angels or supernatural beings to spread the Good News. He uses ordinary people, and when ordinary people are faithful in doing the simple task, God does extraordinary things through them.

Then next time you are tempted to give up, please remember Edward Kimball, whose persistence and faithfulness were tremendously honored by the Lord. How different our world might have been, had Edward Kimball not taken his Saturday to seek out young Dwight Moody. Yes, how different? You can count the apples on a tree, but only God knows how many apples are in a single seed.