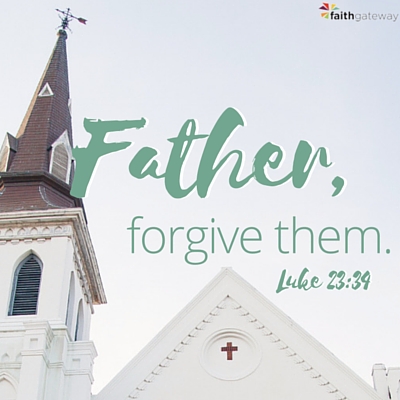 In our Bible study, we are studying “Acts of God”. After hearing about the massacre in Orlando over the weekend, I read these words:

Forgiveness is a choice – it’s an act of courage, and for healing truly to be accomplished, it requires the grace and power of God. Forgiveness is a matter of you needing to forgive for the sake of your spiritual and emotional health.

This morning I received the following devotional in my email, and want to share it with you. The source is: Forgiveness: A National Tragedy and Radical Love by Herb Frazier, Bernard Edward Powers Jr., Marjory Wentworth, from We Are Charleston

Editor’s Note: On June 17, 2015, at 9:05 p.m., a young man with a handgun opened fire on a prayer meeting at the Mother Emanuel African Methodist Episcopal (AME) Church in Charleston, South Carolina, killing nine members of the congregation. The captured shooter, twenty-one-year-old Dylan Roof, a white supremacist, was charged with their murders. Two days after the shooting, while Roof’s court hearing was held on video conference, some of the families of his nine victims, one by one, appeared on the screen—forgiving the killer. The “Emanuel Nine” set a profound example for their families, their city, their nation, and indeed the world.

All of the seats in the courtroom were taken by the time Post and Courier reporter Andrew Knapp stood in the doorway to observe a bond hearing for accused killer Dylann Roof. As a seasoned journalist who delves into public safety issues for Charleston’s daily newspaper, Knapp has reported big stories before, but the words he was about to hear were shocking yet powerful — and for a moment unbelievable. Knapp checked himself to make sure that the words he was hearing were indeed being spoken. Family members of those who’d had their loved ones snatched from them just two days before spoke directly to Roof — who only heard their voices — as they said they forgave him for his alleged crime.

Roof stood in front of two county sheriff’s deputies in a nearby room at the county jail. On the television screen Roof could see the bond hearing judge but not the people in the packed courtroom. The courtroom audience could see Roof on a television screen, and Knapp watched Roof’s face closely for any sign of emotion, but he showed none. Knapp felt certain that Roof must have felt something inside, but it will remain a mystery, perhaps, until Roof goes on trial for nine counts of murder.

Knapp was in awe of what he witnessed as relatives of the victims called “for grace and mercy.” Knapp says, “I can’t imagine anyone not being affected by it in some way.”

There is virtually no precedent in America for what transpired at that bond hearing. The forgiveness expressed by some of the family members astounded everyone who heard them speak. The hearing was broadcast live on television, and almost as soon as the brief hearing was over, the video went viral, and people all over the world heard the trembling voice of Ethel Lance’s daughter, Nadine Collier, who was the first person to say,

She was followed by soft-spoken minister Anthony Thompson, whose wife, Myra, had led the Bible study two nights before. He also expressed forgiveness, suggesting that Roof repent, confess, and give his life to Christ so he could change.

Felicia Sanders, who witnessed the massacre and miraculously survived with her granddaughter, followed Thompson. The pain in her voice was raw, but she still ended her statement with the words, “May God have mercy on you.” In later statements she described the way she forgave immediately and said it was not a choice. “If you don’t [forgive] you’re letting evil into your heart. You’re the one suffering. You’re the one hating. You have to forgive. For you.”

Daniel Simmons’s granddaughter, Alana, spoke next; her voice was clear and filled with conviction when she said, “Hate won’t win.” Since then, she has turned this idea into a powerful movement called Hate Won’t Win.

DePayne Middleton-Doctor’s sister, Bethane Middleton Brown, spoke last. Her voice was trembling yet defiant when she admitted that she was angry, but that her sister had taught the family that love came first — so she forgave Roof and prayed for his soul. In keeping with her sister’s belief that theirs was a family that love built, she is now raising DePayne’s four beautiful daughters.

Since the cameras were on Roof, who remained expressionless throughout the proceedings, the disembodied voices were even more powerful to viewers. The sounds of anguish and the pain seemed even more acute.

There are cynics who assume these extraordinary expressions of forgiveness were only a trip of the tongue when these family members were put on the spot — but if that’s true they would have recanted their statements or qualified them somehow. And that is not what has happened. In fact, there seemed to be a higher power at work that Friday morning in June, and it was for all of them a moment of revelation from which they continue to gather strength. Each of them said something distinctly different at the bond hearing, and all the complexities and contradictions that weave their anger and grief into the notion of forgiveness must be considered. This forgiveness is not easy; it is quite the opposite.

But not every family had a representative at the bond hearing, and not all the family members feel the same way about forgiveness. Forgiveness itself is as complex as any human action. These extraordinary expressions of forgiveness do not suggest acceptance, nor do they imply forgive and forget. Although no one spoke from Sharonda Coleman-Singleton’s family at the bond hearing, her son, Chris, publicly expressed forgiveness. Chris, a baseball player for Charleston Southern University, spoke on ESPN with journalist Bob Woodward soon after the church massacre. His younger sister, Camryn, told Woodward that she was initially shocked that her brother responded with forgiveness, but she prayed about it and realized that being consumed with hatred was worse.

Does this mean forgiveness is a choice one makes in order to survive the grief? If so, when is that acceptable? According to Cynthia Graham Hurd’s brother, Malcolm Graham, forgiveness is possible under certain circumstances. Malcolm was driving to Charleston from his home in Charlotte when he heard the bond hearing unfolding on National Public Radio. “When I heard the first person and second person say, ‘I forgive,’ I said ‘That’s the sound bite. The media jumped on it and spread that forgive thing across nine families,’ which is not true,” he says. “If my sister was walking down the street and she was hit by a distracted driver who was texting and driving and she got killed and the person immediately said, ‘Please forgive me; that was not my intent when I woke up this morning’… I would be very upset, but forgiveness would come a lot easier.”

Nadine Collier’s sister, Sharon Risher, is “not there yet.” As a pastor, she acknowledges the need for forgiveness as a practice in our society, but she considers it a process with no time limit: “The God I believe in is patting me on the back, saying, ‘You take your time.’ ”

Forgiveness for some is a journey, and for everyone affected by this tragedy, this journey is indeterminate and unique. Built into this equation is the fact that we all grieve differently, and no two people experience loss in exactly the same way. Murder may be the hardest kind of death to process, and the emotional response is much more complicated because this unfathomable grief is coupled with anger. In Charleston the media attention has exacerbated the situation; something private became public immediately, in ways that were unexpected and out of one’s control.

What did Jesus say about forgiveness, and what can that teach us about this extraordinary practice? In Matthew 18, Peter asks Jesus how often he should forgive if a member of the church sins against him. “‘As many as seven times?’ Jesus said to him, ‘Not seven times, but, I tell you, seventy-seven times’ ” — Matthew 18:21–22 NRSV

The response is clearly not about how often one forgives, but the number itself is haunting since Roof fired exactly seventy-seven bullets in the Emanuel Church basement. Christ’s words from the cross at Calvary, Father, forgive them; for they know not what they do. — Luke 23:34 KJV reverberate across the centuries and have been used by countless people as an example:

“Father Forgive” is inscribed on the wall behind the altar at the Coventry Cathedral in England, bombed by the Germans in 1940. It produced the International Centre for Reconciliation, which continues to address conflicts in societies around the world. In 1964, Dr. Martin Luther King Jr., in a sermon he titled “Love and Forgiveness,” said, “These sublime words from the lips of our Lord and Master on the cross of Calvary represent love at its best. They represent the magnificent example of the courage to love.”