The Biblical Pattern of Reconciliation 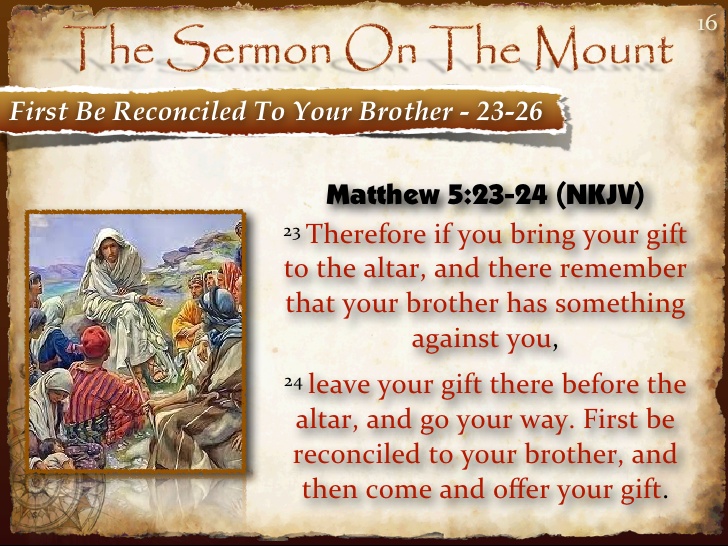 Therefore, if you are offering your gift at the altar and there remember that your brother has something against you, leave your gift there in front of the altar. First go and be reconciled to your brother; then come and offer your gift. Matthew 5:23-24

No marriage or friendship is free of conflict. The history of humanity is an ongoing story of disagreements, which often start over trivial, unimportant issues but escalate to warfare where battle lines are drawn and people fight to their deaths. Unfortunately when people marry they often do the same thing. Trivial misunderstandings and disappointments begin to snowball, and not knowing how to deal with conflict, couples allow the disagreements to escalate. Conflict grows greater fight by fight until differences are irreconcilable.

It may be academic yet it’s true–conflicts are not new. The Bible is full of stories of individuals who didn’t agree. Cain killed his brother. Jacob cheated his brother out of his birthright. Miriam didn’t like her brother Moses getting all the glory in his battle with Pharaoh. The disciples were annoyed that the mother of James and John asked Jesus if they might not be his first lieutenants, sitting at his right hand, and Paul said he withstood Peter to the face because he would have a meal with Gentiles when no Jews were around, but when he had the company of his brothers, he stuck to kosher dills and matzo ball soup and ignored his Gentile brothers.

OK, we know that there’s plenty of conflict, but how do you deal with it? There are biblical models that provide the only real principles and keys to reconciliation, and–believe it or not–these are the same principles that successful secular counselors and diplomats follow, no matter what they believe about God.

The story of Joseph, the lad who was sold into Egypt, provides a beautiful picture of what restoration and forgiveness are about. Jacob, having fled for his life, some fourteen years later decided to go home and had to pass through country controlled by his brother. He first struggled with the Lord over the issue, and with the assurance of God’s help, made restitution for his wrongs, finding acceptance if not forgiveness from his brother.

Peter recognized that he was inconsistent and responded to Paul’s criticism. The issue was settled. In capsule form, here’s the biblical model for reconciliation when conflict tears you apart.

Step #1: Confront the person who offended you. Attitude is everything. When you approach the issue with humility, your adversary is disarmed. Saying, “I value your friendship, and I don’t want to see this issue tear us apart,” goes further than saying, “Look, you….” which is inflammatory and combative.

Step #2: Confess your wrongdoing. “But I haven’t done anything!” Possibly, but not likely. “Have you told your husband that you love him and want him back?” I often ask. “Well, he knows that.” Not enough. Say it. Write it. Get the message across.

Step #3: Be willing to compromise. Negotiation and compromise are two keys to conflict resolution. Marriage is one big, “I do!” with a lot of little “Uh-huhs…” Dogmatic, inflexible individuals who can’t bend should never marry. But if they do, they must learn to bend; otherwise, the pressure causes the strongest to break or else eventually stand alone.

Step #4: Be quick to forgive and forget. Forgiveness means, “I give up my right to hurt you because you hurt me!” I fully understand some things may be etched on your memory for the rest of your life, but you can refuse to let the record be written in blood. With God’s help and His grace, you can learn compassion and tenderness, and experience His healing, which makes you a more loving, more caring person.

“If I had only known to pray,” one woman wrote, “I think we could have saved our marriage.” Restoration is God’s major work beyond creation! Let His Spirit do a work in your lives and save a marriage!